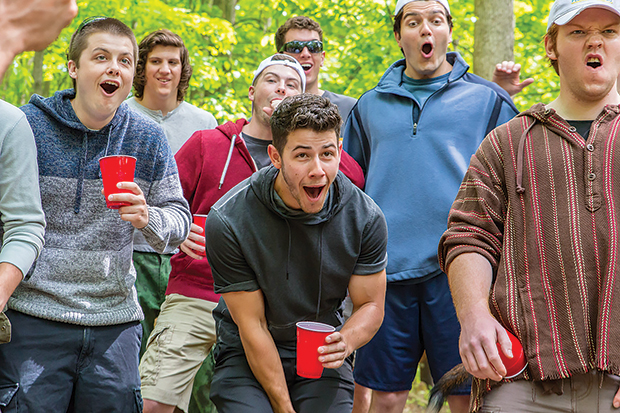 Summer is the movie season of big budgets, big explosions, big heroes and big villains. After Labor Day, the box office greets smaller budgets, fewer explosions and more subtle characters. If you heard about some of these Sundance, SXSW and other festival favorites, soon you will be able to see them for yourself.

When his hard-earned kicks get snatched by a local hood, fifteen-year old Brandon and his two best friends go on an ill-advised mission across the Bay Area to retrieve the stolen sneakers.

Stuck at a crossroads in her personal life, it falls on Miss Stevens to chaperone three of her students — Billy, Margot, and Sam — on a weekend trip to a drama competition.

Reeling from a terrifying assault, a 19-year-old boy pledges his brother’s fraternity in an attempt to prove his manhood. What happens there in the name of ‘brotherhood’ tests both boys and their relationship in brutal ways.

When Big Ronnie and his son Brayden meet lone female tourist Janet on Big Ronnie’s Disco Walking Tour—the best and only disco walking tour in the city—a fight for Janet’s heart erupts between father and son, and the infamous Greasy Strangler is unleashed.

An animated and action-packed look at America’s first mass school shooting, when the worst in one man brought out the best in so many others.

In 1974, a female TV news reporter aims for high standards in life and love in Sarasota, Florida. Missing her mark is not an option. Based on true events.

Tensions rise and fall as a formerly-goth young nun ventures home to visit her estranged family in the wake of her brother’s return from the Iraq War.

A mysterious loner makes his way through the barren desert, his loyal dog at his side. After an unspeakable act occurs, he ventures into town — dubbed “The Valley of Violence” — to exact his revenge upon the perpetrators.

Meeting by chance when they return to their tiny California hometown, two former high-school sweethearts reflect on their shared past through the lens of their differently dissatisfied presents.

In this coming of age documentary, four friends on the autism spectrum who have bonded through humor and performed as the comedy troupe Asperger’s Are Us will prepare for one final, ambitious show before going their separate ways.

A developmentally delayed 40-year-old man named Shonzi is sent to live with his brother Todd. But when Shonzi develops a crush on Todd’s new girlfriend Lindsay, he threatens to reveal past secrets that could ultimately tear the couple apart.

Two friends, both actresses living in Los Angeles, go on a weekend trip to reconnect and begin to lose their grasp on reality when they come face-to-face with their suppressed jealousies and deep-seated resentments toward one another.

When tragedy shatters her family’s idyllic life in the countryside, her deep trauma gradually awakens some unique curiosities. As she grows up, her desire to connect with the world around her takes a distinctly dark form.

*Keep in mind that release dates are subject to change.