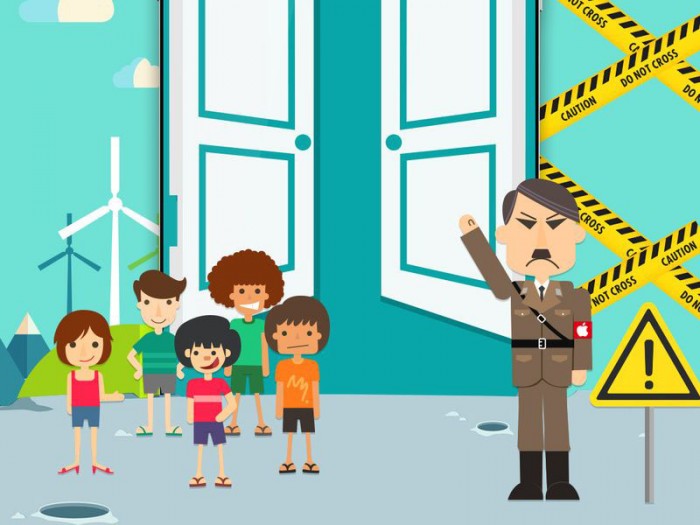 A Chinese Internet TV, Leshi TV CEO has put out some graphical illustrations comparing the Apple Inc to the Hitler. Founder and CEO Jia Yueting posted some of the images from the official Weibo account that was having an illustrated Hitler with Apple logo on his armband.

The image was originally sent out to tip some information on the rumored smartphone from the LeTV. Several rumors have surfaced the Internet that the company is soon going to launch an Android smartphone in the Chinese market.

However, on the top of the illustration, LeTV wrote, “Crowdsourced, freedom vs. arrogance, tyranny,” which clearly indicates that the company is talking about the closed source nature of the Apple iOS. Since, the company is launching a smartphone with an Android operating system, it is obvious for it defame it.

Company says that the developers in the Apple ecosystem are bounded. They are bound to develop with set of rules, however, in Android they can express their creativity and innovation in several forms.

The accompanying message from the CEO also stated, “Apple’s closed loop mode significantly curbs technological innovation, hinders the industrial progress and hurts the interests of users. Everyone is worshipping Apple.”

The illustration had Adolf Hitler with some ‘Caution: Do not cross” yellow tapes to one side and smiling kids on the other. There were two lines drawn at the bottom telling the path the follow, one going to the Apple or the Hitler, and another towards the happy kids.

Apparently, the company is marketing its upcoming Android smartphone with such wrong moves. It isn’t the first time when Cupertino giant has been hit with rotten tomatoes. A few days ago, Google also pointed out few things about the iOS in its latest Advertisement campaign for Android.