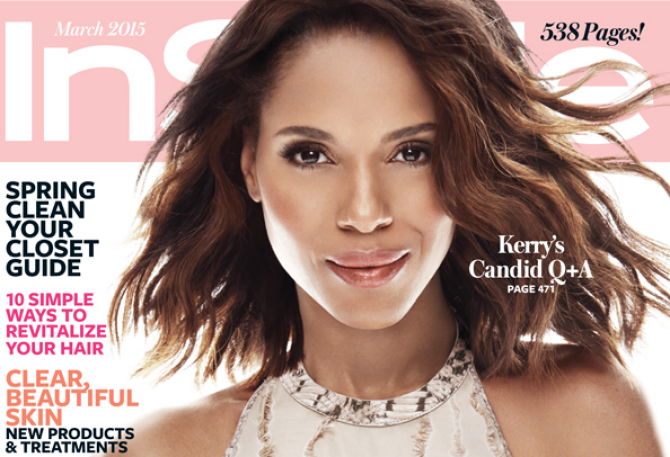 Kerry Washington was the subject of criticism on social media after the scandalous star posted a photo on Instagram for the upcoming InStyle’s March 2015 edition, which showed her skin to be significantly lighter than in real life. Some of her fans heavily criticized the magazine for photoshopping her facial appearance, as well as skin tone.

Some of the posts suggested that she looked white without any cheekbones with some going as far as asking the actor if she was okay with the cover turn out. On its defense, InStyle in a statement reiterated it was a delight and honor to have Washington on the cover affirming it did nothing to alter the actor’s skin color or appearance.

InStyle in a statement also said it was taking the fans concerns seriously affirming its commitment to ensuring the experience learnt, had an impact in the way women are portrayed going forward. Washington on her part reiterated that the magazine’s response to allegations of photoshopping as well as skin lightening was ‘beautiful.’

One fan who admits to being a strong fanatic of the Scandal stressed that Washington did not look like anything in the photo with another one reiterating the photo did not give the actress any justice at all.

If the magazine is to go forward with the cover photo for the March edition, then it will present Washington as brightly lit in white with shoulder-baring dress, hands on hips and hair windswept. The actress opens up about her fashion sense as well as her exercise regimen that keeps her in shape inside the magazine.

Washington in the magazine states that her fashion sense in real life is much bolder than her TV character Olivia people. She, however, admits that Olivia’s fashion senses remains’ much influential than her personal fashion aimed at influencing ladies to dress up for the office.