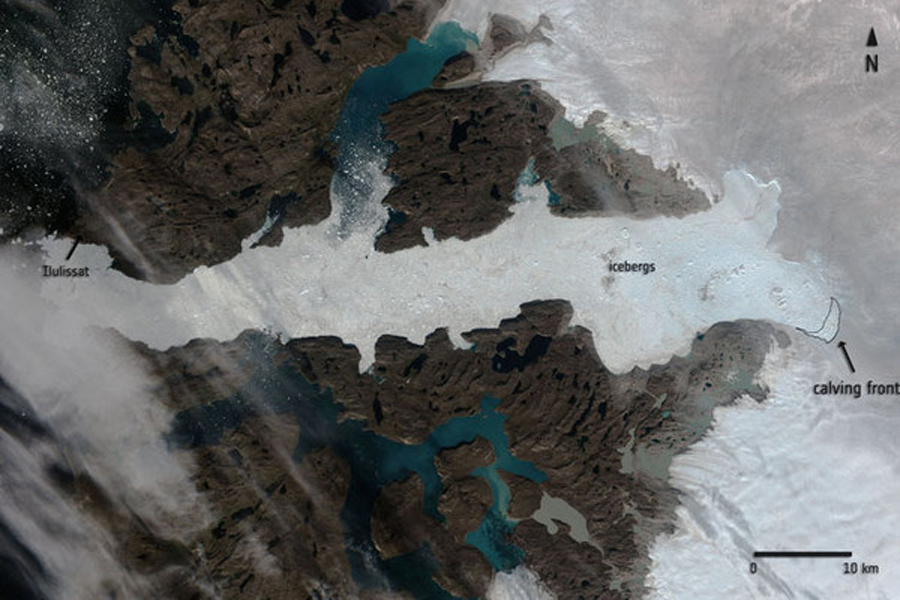 The huge frozen island of Greenland just lost a chunk of ice and the results are dramatic enough to be visible from the space. The massive calf in the infamous Jakobshavn glacier cost the island almost five square miles of ice, which could perhaps make it the biggest calving event on record.

The iceberg which broke off the gargantuan glacier is large enough to cover a Manhattan sized island in almost 1,000 feet of ice! “Assuming the ice is about 1400 m deep, this equates a volume of 17.5 cubic km,” points out European Space Agency (ESA) “which could cover the whole of Manhattan Island by a layer of ice about 300m thick.”

The pictures of the entire meltdown which is believed to have taken place between Aug 14 and Aug 16 have been released by both NASA and the ESA.

Calving is not a new feature at the Jakobshavn glacier. It is famous in history as having produced the iceberg which sank the massive Titanic in 1912. In the recent past, it lost 3.4 square miles of ice in 2010 and also earlier this year, as per the ESA.

Not all scientists however believe this to be the largest recorded instance of calving. Richard Alley, a glaciologist at Pennsylvania State University, wrote “Overall, I don’t think that they really can nail the ‘largest’ [calving event] or not. I wouldn’t get too excited on this, even though it is not good news.”

However there is no doubt that calving events have become more frequent and bigger in the recent decades due to rise in both sea and air temperatures.

“We are now seeing summer speeds more than four times what they were in the 1990s, on a glacier which at that time was believed to be one of the fastest, if not the fastest, glacier in Greenland,” said Dr. Joughin, a glaciologist at the University of Washington’s Polar Science Center, while talking to a Christian Science Monitor correspondent.

At present, Greenland is one of the biggest contributors towards the rising sea levels, account ting for almost 1mm rise annually. That makes it a bigger threat than the much bigger Antarctica.