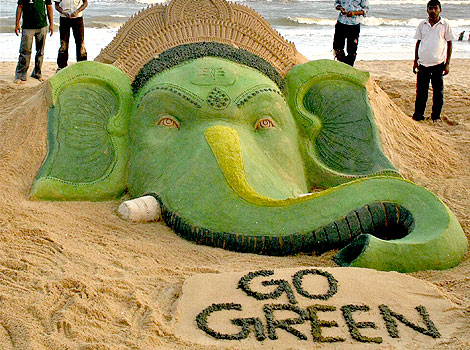 With Ganesh Chaturthi festival waiting to approach on August 29, 2014, the entire Mumbai and India is gearing up for a better celebration of Hindu god Ganesha using eco-friendly idols. At least that’s what the city of Mumbai plans to do.

Most manufacturers and regular local sculptors of the city are already brushing up their collections for the 10 days bonanza, which will have clay idols, instead of the regular PoP or Plaster of Paris idols.

According to media reports, the state pollution control board has been doing its best to ensure the eco-friendly idols of Lord Ganesha are made available at rates that are affordable to buyers and sellers alike.

The price of the idols is expected to be lower by 25% this year as compared to 2013, which will help in fast selling of the environment friendly models.

The board associated with cause will also have its own steps to ensure that the manufacturers of genuine clay idols get the maximum promotion.

Also known as Vinayaka Chaturthi, Ganesha Chaturthi is among the most awaited festivals of India. In parts of the country, including Maharashtra and Mumbai, the celebrations continue for a total of 10 days. Gujarat, Tamil Nadu, and Goa are the other states where the celebrations are more elaborate.

Traditional Hindu stories tell about Ganesha as the son of Hindu God and Goddess Shiva and Parvati respectively, who was given the head of a elephant, and thereby the name, which means Lord of the Elephants.

Alone in the city of Mumbai, the celebrations range from normal idols at home, to pompous celebrations in various places in thousands of numbers.