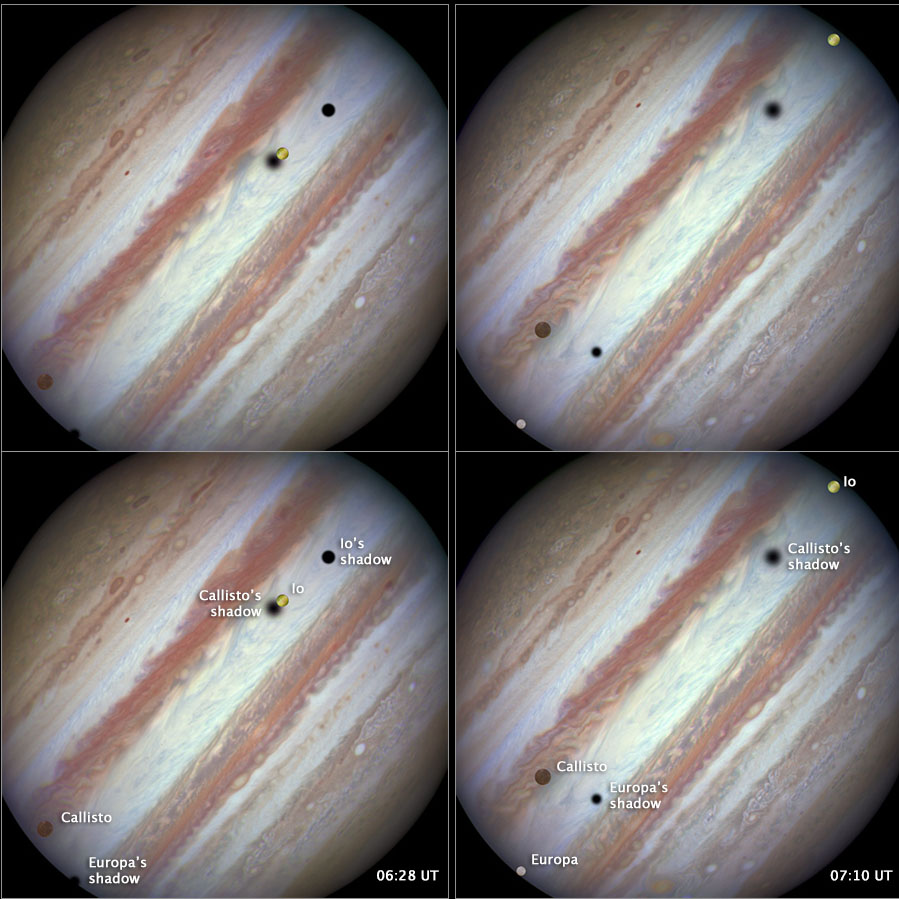 NASA’s Hubble Space Telescope managed to capture a series of well-timed shots on January 2014, to catch the best possible images of the Jovian lunar gathering. Scientists identify this gathering as a rare event, occurring only once or twice in a decade.

The Hubble Telescope had to capture this event in series of images in quick succession to catch all three moons hovering around colorfully banded Jupiter. Hubble succeeded in capturing three of Jupiter’s biggest moons making their way across the planet in the same frame.

Europa, Callisto and Io are three of the four Galilean satellites, discovered in 1610 by great astronomer Galileo Galilei. These three and Ganymede are four largest of the 67 known moons of Jupiter, and also among the largest bodies in the solar system including Pluto, Ceres and all the dwarf planets.

Missing from the sequence is Ganymede, one of the four Galilean moons that was outside Hubble’s field of view and too far from Jupiter to be part of this conjunction.

The Hubble images also help understand how different each of these moons are and the variation in their relative distance from the planet. Io riddled with active volcanoes is looking orange-yellow in an image. Callisto is brownish in color while Europa is a yellow-white, reflecting its frozen ice covering exterior.

Europa is of special scientific interest given its potential for life following the discoveries pointing at possibility of water-worlds in the form of a subsurface ocean. The White House budget request for 2016 has also emphasized a special budget to fund NASA for a mission to Jupiter’s icy moon Europa. The mission to Europa received $100 million for 2015 from Congress. However, the White House has allotted only $30 million in the 2016 budget request.

Hubble, jointly managed by NASA and the ESA, is the first major optical telescope to be placed in space to observe the planets, most distant stars and galaxies. The telescope was deployed in April 1990, marking the most significant advancement since Galileo’s telescope. Hubble’s successor, The James Webb Space Telescope, is expected to launch in 2018.