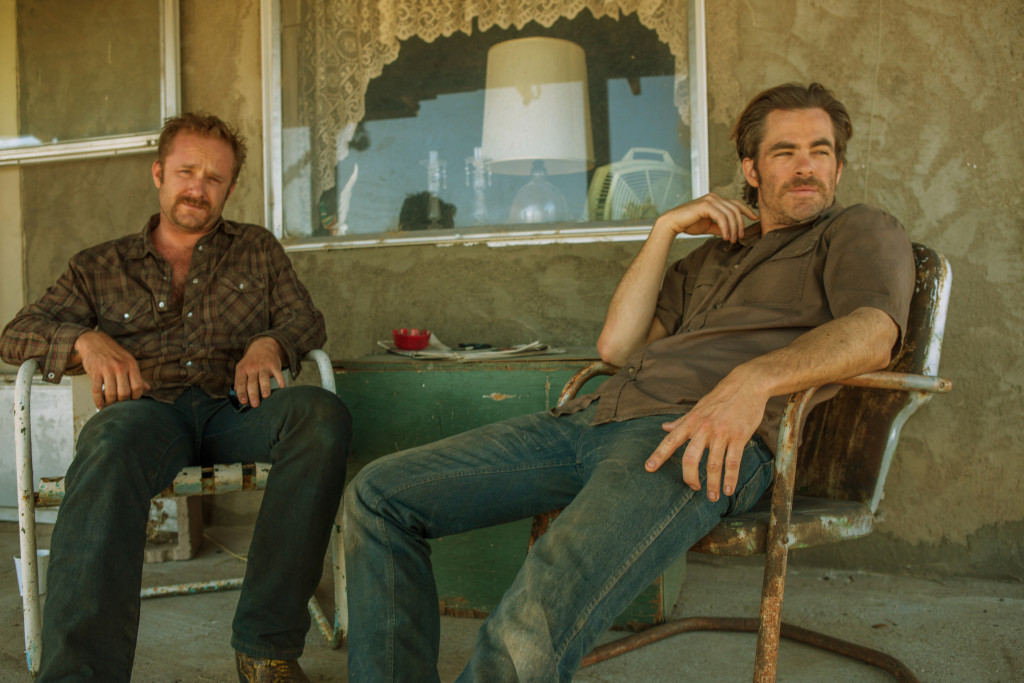 Believe me, I love watching scenes of mass destruction on the big screen as much as any fanboy. On the other hand, I love a good indie movie that focuses on plot and characters. Three of my top five movies of 2015 were films that barely made a dent at the box office (The Stanford Prison Experiment, 99 Homes and The D Train). For the first time in 2016, I’ve seen a great indie movie that has a good chance of making my Top Ten list of the best movies of the year.

Hell or High Water is a story about the collision of the Old and New West. Two brothers – Toby (Chris Pine), a straight-living, divorced father trying to make a better life for his sons; Tanner (Ben Foster) a short-tempered ex-con with a loose trigger finger – come together to rob branch of the branch of the same bank that is foreclosing on their family land. Vengeance seems to be theirs until they find themselves in the crosshairs of a relentless, foul-mouthed Texas Ranger Marcus Hamilton (Jeff Bridges) looking for one last hurrah before his retirement. As the brothers plot a final bank heist to complete their plan, a showdown looms between the three men.

The award-winning UK filmmaker, David Mackenzie, expertly directs this cops and robbers caper/family drama. It’s sort of like if Thelma & Louise met No Country for Old Men. This was made possible with an affecting script by Taylor Sheridan. Coincidentally, Sheridan was also the screenwriter for another one of my favorite movies of 2015, Sicario. Sheridan is now officially one of my writing idols.

Anyways, Jeff Bridges acts his Texas Ranger medal off as always. He doesn’t have six Oscar nominations with one win for nothing. Ben Foster, who is an underrated actor in my opinion, is his usual reliable self. The one wildcard, in my opinion, was Chris Pine. Is he more than just a pretty face? I’ve all seen him in his action and comedy roles, but wondered if he had the acting chops. Yes. Yes he does. This is a potentially game-changing role for him. I know I said the same thing last week about Margot Robbie in Suicide Squad, but every actor just needs that right role to really sink their teeth into. Pine sunk his teeth into this role without chewing the scenery in the process. Not only are the leads solid as, well, hell, even the bit characters feel alive unlike many one-note bit characters.

I’ve never been to West Texas, but the film certainly seems to capture the feel. It’s probably because Sheridan is a West Texas native. He sums up the film better than anyone else can.

“People in Texas are such fighters and, one way or another, they have been fighting for land, for right or wrong, for centuries. There’s a real connection to the land in West Texas – perhaps because it’s so harsh yet so strangely beautiful, so giving in some ways, so challenging in others and so fiercely contested throughout history. The history of Texas has been a repeating pattern of conquest and assimilation. Being from there, I’ve seen it and I’ve also seen that one thing no one can ever seem is to beat the bank. The bank has become an umbrella symbol for all the ways that West Texas has become a way of life that is now largely for the wealthy, and for all the ways in which it has become nearly impossible for some people to carve out a future there.”

For all of us who have had troubles carving out our own futures, this film is disturbingly, relatable. I couldn’t help but feel the brothers’ satisfaction. The idea of paying back the bank with the bank’s own stolen money is utterly gratifying. With no weak link, Hell or High Water is a master course in filmmaking. Along with the top notch directing, writing and acting, the thematically sound film features gorgeous cinematography by Giles Nuttgens. The music was co-scored by the inimitable Nick Cave. NME once described him as “the grand lord of gothic lushness.” His music, along with that of Warren Ellis, is the perfect complement to this lush, modern, gothic western.

Come hell or high water, you need to see this movie.