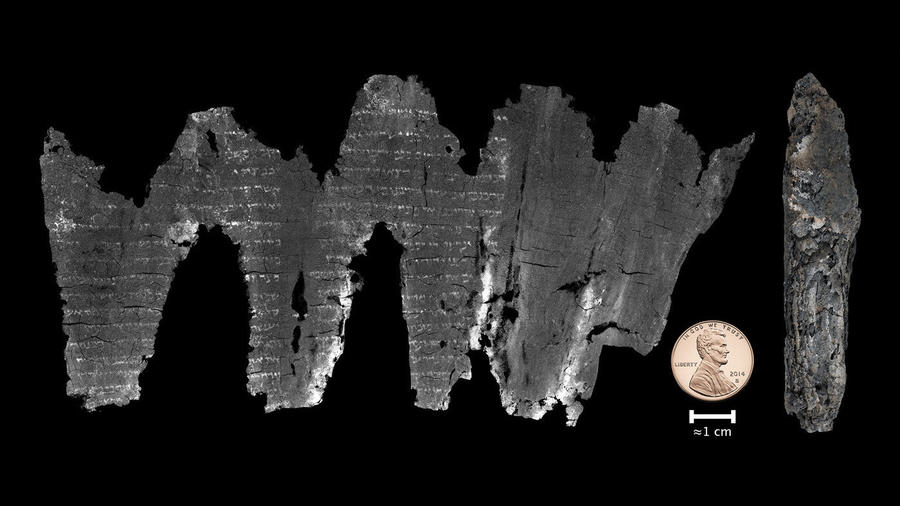 New software technology developed by W. Brent Seales, a computer scientist at the University of Kentucky, has allowed researchers to actually read portions of a biblical scroll found at the En-Gedi excavation site in Israel almost 50 years ago, according to a story on nytimes.com.

The scroll itself is somewhat controversial, with carbon-14 dating saying the writings were copied somewhere around 300 A.D., but the style of writing contained in the scripts suggest much earlier dating.  Ada Yardeni, an expert in Hebrew paleography, said the scroll could be safely dated between A.D. 50 and 100, based on a writing analysis.

Dr. Seales developed a method that is called virtual unwrapping,  which makes a model of the scroll’s surface in the form of a mesh made up of tiny triangles.  A computer program resizes each triangle until the virtual surface of the scroll is best fitted to the internal structure, that has been revealed by scanning method such as a CT scan.

The ink marks on the scroll are then assigned to their correct place on the structure, and the software allows the three-dimensional structure to be displayed as a sheet, making the scroll readable.

Experts in the field are excited about the new technology and say it may open up many other ancient scrolls that have been previously unreadable.  This would include about 300 carbonized scrolls recovered at Herculaneum that were destroyed when Mount Vesuvius erupted in A.D 79, as well as several of the Dead Sea scrolls.

Emanuel Tov, an expert on the Dead Sea scrolls at the Hebrew University of Jerusalem, offered, “We have never found something as striking as this.  This is the earliest evidence of the exact form of the medieval text,” referring to the Masoretic text found on the scrolls.  A version of the text appears on the Dead Sea scrolls, with some variations.

The scroll is said to contain the first two chapters of Leviticus, and provides a listing of sacrificial ceremonies performed at the temple in Jerusalem.

Dr. Seales and his team said in the Thursday issue of Science, this finding represented “the first severely damaged, ink-based scroll to be unrolled and identified noninvasively.”