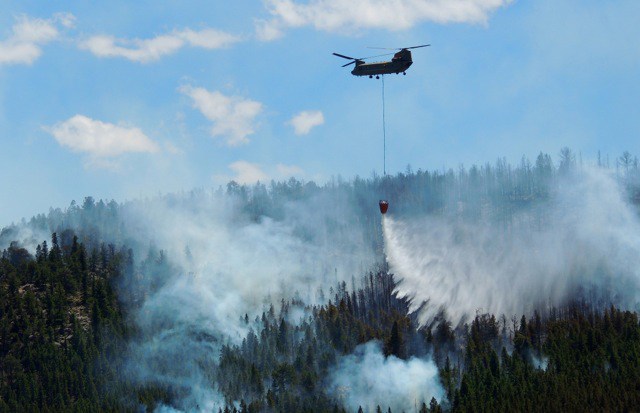 About 2,000 people have been evacuated from a large area in Boulder County, Colo., as the Cold Springs forest fire rages uncontained in the Nederland area. Five home have been destroyed and 65 others are within the fire’s perimeter, although none are in the immediate path of the blaze. The fire started Saturday afternoon.

A breezy day has complicated containment efforts even though Denver area temperatures are cooler today than yesterday. Boulder County Sheriff Joe Pelle said Monday that he was optimistic that the fire could be held to the north side of Boulder Canyon.

Two men have been arrested and face felony arson charges in connection with the blaze because, according to a statement issued by Mike Wagner, sheriff’s commander, “lives were endangered as a result of the fire.” The men, 28-year-old Jimmy Andrew Suggs and 26-year-old Zackary Ryan Kuykendall are from Vinemont, Ala. The two men were camping on private property on Thursday night at an “ad hoc” campsite near the Peak to Peak Highway.

According to Wagner, “the men did not ensure that the fire was properly extinguished by dousing it with water or making sure the ashes were cool to the touch before leaving the site.” Officials believe that warm weather and winds allowed the fire to continue smoldering. It eventually spread beyond the campsite. Someone called 911 to report the blaze at about 1:30 p.m. Saturday.

Suggs and Kuykendall are being held at the Boulder County Jail. Bail is set at $200,000 for Kuykendall and $150,000 for Suggs. According to an arrest affidavit, Suggs admitted that it had to have been them that started the fire as no one else was around.

According to the Incident Information System (InciWeb) on Monday afternoon, the fire is expanding as crowning, torching and spotting occur. Ground resources are stretched and air resources are critical. The fire has spread over roads which have previously been used as escape routes, complicating tactical operations.