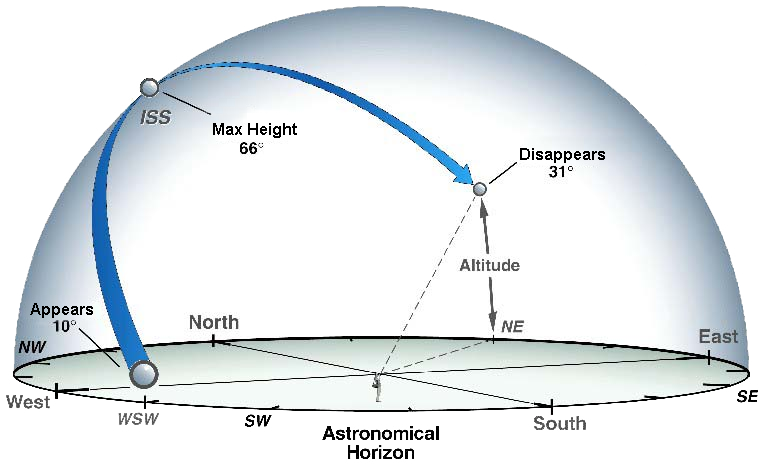 The NASA website is now offering detailed instructions for viewing the International Space Station with the naked eye as it flies overhead. It’s simple. Earthling viewers put in their location and the site comes up with dates and times the ISS can be seen. The space station is visible in its orbit from several thousand locations around the world.

NASA says that the ISS is the third brightest object in the sky, and is easy to spot if one just knows where to look. The website gives detailed instructions about that, showing how many degrees above the horizon the ISS will appear and disappear, and a diagram to help you figure it out.

Sightings all occur within a few hours before or after sunrise or sunset. This is the time when the sun’s light reflecting off the station is contrasting against a darker sky. Although the ISS is also passing by during the day, it is not bright enough to be seen during that time. Sightings correspond with the sky being dark and the space station happening to be overhead.

The space station looks like a very bright star or an airplane moving across the sky, but it does not change directions or have flashing lights. It also moves quite a bit faster than an airplane, as it is moving at 17,500 miles per hour, while airplanes go only about 600.