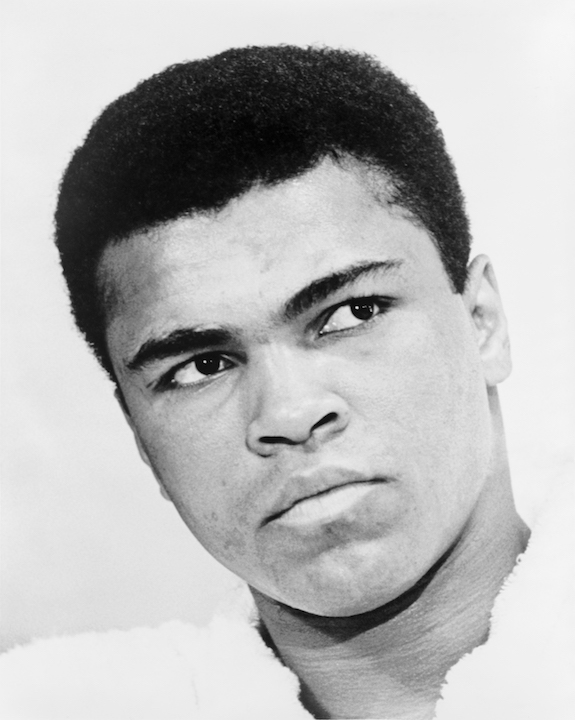 One of the most popular sports figures of all time, Ali risked it all for principle, and came back to glory.

Muhammad Ali amassed a fortune over his lifetime from boxing purses, endorsements and licensing.

But he started from meager means in Louisville, Kentucky. The eldest of two sons of a billboard sign painter and a stay at home mom, Cassius Clay’s first boxing instruction came from a police officer.

Twelve-year-old Clay’s bike was stolen. He was angry and got himself into a kerfuffle the police witnessed. Seeing his anger, passion and already evident girth and strength, the witnessing Louisville officer advised him to take that package to boxing ring rather than risk jail in the future.

And to the boxing ring he went chalking up victories with a low punching slow kill not seen in the professional leagues. And with the victories came fame and fortunes and a 1960 Olympic Gold Medal. At the age of 22 he upset Sonny Liston to win his first world Heavyweight boxing title. Shortly afterwards, he converted to Islam and changed his name. He would successfully defend his title several times, controversially, until his career was interrupted by Ali’s refusal to be drafted into the Vietnam war, and Ali was stripped of his title.

He would not get another shot at the title until 1971, when the “fight of the century” first matchup with Joe Frazier, Ali’s first professional defeat. He lost several more fights until a non-title rematch with Frazier in 1974, in which Ali prevailed, setting the stage for him to content for title again, knocking out George Foreman in “The Rumble in the Jungle” — so named as the fight took place in Zaire. For this fight Ali netted $5.45 million. A third matchup with Frazier in 1975 — the so-called “Thrilla in Manila” pocketed Ali a cool $6 million.

His cornerstone fight on October 10, 1978 – Ali v Holmes—ironically saw a huge $8 million payday for Ali even though he was knocked out by Holmes.

Although his boxing ring days and associated big contest paydays came to an end, his fortune building did not. He and his wife formed GOAT Enterprises. GOAT being an acronym for Ali’s famous tagline, “Greatest of All Time.”

That business model capitalized on endorsements with such big name brands as Electronic Arts and Adidas raking in $5-$7 million each year.

The success experienced by GOAT put Ali and his wife in a position to sell 80% of GOAT in 2006 for $50 Million.

The retained portion has continued to see sizable annual payouts and has contributed to experts ranging Ali’s estate to be worth $50 (per CelebityNetworth)-$80 Million (per TheRichest)—and puts him at or near the GOAT of all time boxer fortunes.

Family spokesperson Bub Gunnell informed the world: “After a 32-year battle with Parkinson’s disease, Muhammad Ali has passed away at the age of 74.”