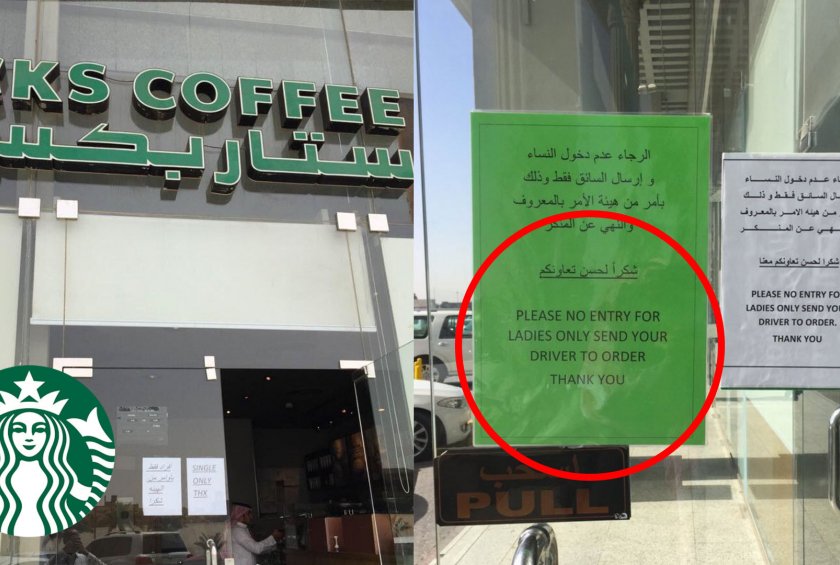 A Starbucks store in Saudi Arabia has banned women from entering due to the lack of a wall that separates the sexes.

A Starbucks store in Saudi Arabia has banned women from entering due to the lack of a wall that separates the sexes. Bowing to local customs and cultural differences, with require men and women to be separated in restaurants, the coffee giant posted a sign outside the store in Rihaydh that said “Please no entry for ladies. Only send your driver to order.” The wall, which was a temporary solution to the cultural requirement, had fallen down.

The photo, which was posted by Twitter user Manar M, has sparked outrage among human rights activists and feminists throughout the world, and Starbucks has received threats of boycott along with angry complaints. However, Saudi religious police ordered Starbucks management not to allow women into the store because of the absence of a “gender wall.” Authorities had discovered the lack of such a wall during a routine inspection.

Gender walls are required for all public shops and restaurants in Saudi Arabia to separate men and women. Women are required to enter through a separate door, as are families.

A Starbucks rep told CNN that they were working with local authorities to get approval to remodel one of the stores in Jarir, which was originally built without a gender wall, meaning only men could enter.

The sign on the Rihaydh store made the assumption that women wanting a coffee would be driven by a male, since women are not allowed to drive in Saudi Arabia.