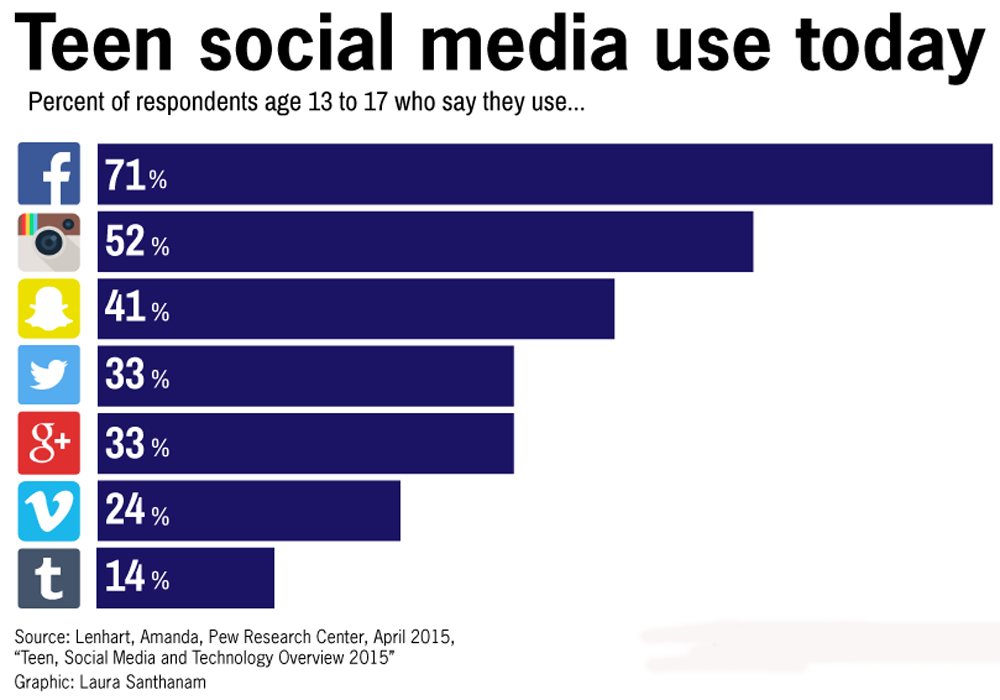 The latest study conducted by Pew Research Center, “Teens, Social Media & Technology Overview 2015,” reveals that though Facebook continues to the undisputed king of networking sites, Instagram is not too far behind either. 71% of the teens use Facebook and 41% of them say they use it more when compared to other sites. More than half o f them use Instagram as well. Incidentally, that too is owned by Facebook.

The study highlighted that a huge upsurge in smart phone usage had led to an increase in the popularity of social sites among teenagers- since they are now able to access them from wherever they are, without having to sit behind a bulky desktop or a much heavier laptop. Nearly three quarters of the teens, found the survey, had smartphone access and 24% of them admitted to performing online activities on a regular basis.

Other popular social media sites among teenagers are Snapchat (41 percent), Twitter and Google Plus (tied at 33 percent, Vine (24 percent) and Tumblr (14 percent).

Boys and girls were also found to have distinctly different tastes when it came to networking sites. While boys were seen to prefer playing video games, girls found visually oriented sites like Instagram, Snapchat and other pinning sites Tumblr and Pinterest more interesting.

Apart from the gender divide, the report also saw a social media disparity between people belonging to different income groups. While Facebook was found to have universal appeal and popular with people from all income levels, teens from wealthier families use Instagram, Snapchat and Twitter more than their counterparts from low-income families.

“It should be noted that some of these differences may be artifacts of differences in use of these sites by these different subgroups of teens,” Pew reported. For example, Instagram and Snapchat are image-based apps that often highlight lavish purchases, vacations and activities that low-income families may not be exposed to.

Pew, a non profit research group, came to these conclusions after comparing data from a “nationally representative” sample of more than 1,060 teens.

The popular chatting app, Snapchat, which scrapped its Best Friends Feature earlier thereby depriving its users the chance of seeing which people on their contacts list exchange snaps most often with others thereon, has now come up with a more private way of identifying best friends.

Snapchat introduced a new feature called Friend Emoji’s on Monday. There are six emojis at present which designate all Snapchat relationships and associations. There is the heart (people you exchange snaps with most often), smile (people with whom you exchange snaps frequently), grimace (two of you snap the same person regularly), smirk (people who snap you frequently though you don’t snap them too often), sunglasses (two of you snap a few of the same people regularly) and finally, fire for consecutive snaps to each other. The last emoji will also have a number against it showing how many days you’ve snapped each other straight.

Unlike the Best Friends feature which was public and visible to everyone and often led to misunderstandings or soured relationships, these half a dozen emojis are private. These will be visible only to the users, with no one else being able to sneak into them.

In addition to this, there is another section called “Needs Love”, which tells you that these are the friends whom you used to snap often, but not anymore and they need love.

The older feature was withdrawn in January after users complained of other people on their lists using the platform to snoop into their personal lives. It would also tell if a partner had been cheating or if a supposed best friend had not been much of a best friend in real life.

So, all those people who hated Snapchat earlier for announcing their intimacy or the lack of it from rooftops will now be seen heading to it again. This time in total privacy.