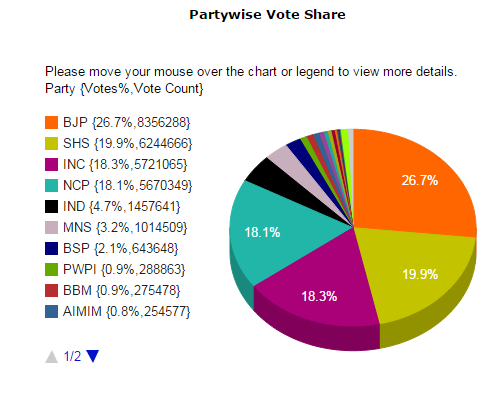 The counting of votes for both Maharashtra and Haryana Assembly elections started today on October 19, 2014 at 8:00 a.m.

The poll results hold high stakes for BJP, which will have an acid test in the popularity of PM Narendra Modi, who got to office in May.

The polls in both states were held on October 15, and the results will be revealed by around 3 p.m. tomorrow.

Maharashtra, in particular, is important for BJP, where it parted ways from 25-year old alliance Shiv Sena and has fielded 280 candidates in the 288-member Assembly.

Maharashtra recorded around 63.13 per cent polling, which is not bad as compared to last record, said a report on The Hindu.

Exit polls had predicted that the BJP will have the maximum share in the polls, although there is a chance that the party may have to look for alliances being short of majority.

Parties like BSP, NCP and MNS had fielded more than 200 candidates across the state.

The situation isn’t much different in Haryana, where too the Congress is likely to leave after being in office for two terms.

BJP had a shock in the bypolls in four states recently, and it remains to be seen on how PM Modi has his influence in the state, given that the Maharashtra state assembly is a huge one.