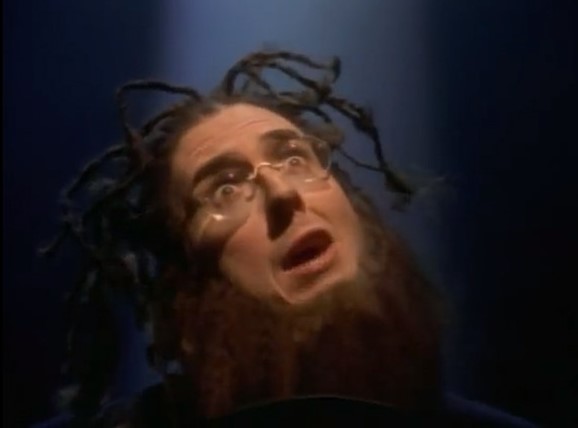 MTV was born in the early 1980s and Michael Jackson and Madonna used the new channel to become THE video icons of their generation. Those two artists have had a Top 40 hit every decade since the 1980s. How many of you would have guessed that Weird Al Yankovic is the only other artist to make that claim to fame? He too used MTV to become a music video icon in his own right. Sure, he’s only had those four Top 40 hits, while Jackson and Madonna have had dozens. His influence, however, is much greater than the chart position of his singles. In honor of his current North American tour, here are Weird Al’s ten biggest hits. In fact, two of his top five hits are parodies of Michael Jackson and Madonna classics.

With our presidential election in full swing, idiocy in America fills the 24 hour global news cycle. Though this isn’t probably what Weird Al had in mind when he parodied Green Day’s “American Idiot,” it’s always fun to celebrate the idiocy of other countries, no matter how true it might be or not.

The Greg Kihn Band had a huge hit in 1984 with “Jeopardy.” In a weird twist, Alex Trebek had only been hosting “Jeopardy!” for three months. Though we haven’t heard much from Greg Kihn since, Alex Trebek and his little game show keeps plugging along. Perhaps Weird Al’s video served as an inspiration for the writers at “Saturday Night Live” when Will Ferrell nailed his own parody of the venerable talk show host.

In 1984, The Police were one of the biggest bands on the planet due to hits like “King of Pain.” The album which contained the song, “Synchronicity,” was one of the best-selling albums of 1984 and would go on to earn a Grammy nomination for Album of the Year. If you’re going to parody a song, you might as well pick one of the most successful bands of the year. And for those of us of a certain age, who didn’t want to be Sting for a day?

Coolio was not thrilled with Weird Al’s parody of his hit, “Gangsta’s Paradise,” saying his song was too important. Even if Coolio was right, which he wasn’t, his outrageous hairdo was begging for a parody of its own.

“Like a Virgin” was Madonna’s first #1 hit and launched the singer into the music stratosphere. Not only did she have a knack for recording catchy pop tunes, she kept herself relevant in the pop culture zeitgeist by playing to the MTV crowd with her provocative videos. She was, figuratively, begging to be parodied by Weird Al and parody her he did. Though “Like a Surgeon” didn’t reach the Billboard heights of “Like a Virgin,” we still remember the song today.

Remember 2013 and you couldn’t go anywhere without hearing Robin Thicke’s “Blurred Lines?” The song hit #1 in over 25 countries and was the longest-running #1 single in the U.S. Weird Al’s parody ended up being one of his biggest hits as well. It was his first Top 40 hit in seven years. As a writer, this song holds a special place in my heart as a word crime is committed every second – and that’s just on my Facebook feed. on the use of “it’s” as a possessive instead of the correct “its,” and the optional use of the Oxford comma. For this song alone, Weird Al has my eternal gratitude.

Besides the cheesy hip hop music, which I loved by the way, the ‘90s are best known for the birth of grunge. And leading the grunge charge was one of the biggest and most influential bands of the ‘90s, grunge or otherwise. Back in the day, we didn’t have the Internet at our fingertips to find the lyrics of a song. That would have been handy since no one knew what Kurt Cobain was singing most of the time. This fact wasn’t lost on Weird Al who sang about having marbles in his mouth.

As with Madonna, Michael Jackson’s career exploded with “Thriller” just as MTV was exploding. Part of Jackson’s meteoric rise was due to his hit, “Beat It,” which Billboard ranked as the #5 single of 1983. Perhaps not-so-coincidentally, Weird Al’s parody became his first Top 40 hit. I still can’t hear “Beat It” without also thinking of “Eat It.”

Chamillionaire’s “Ridin’ Dirty” was ranked by Rolling Stone as the #3 best song of 2006 and was that year’s top-selling ringtone. Before I wrote this article, if you had asked me what Weird Al’s highest charting single was, this song would not have been any of my guesses. Maybe it’s because of the fact that not only does Weird Al rap, he actually raps pretty well. Maybe Eminem should be happy that Weird Al pursued a parody music career and not a white guy rapper career.

The Israeli police have finally managed to nab the nefarious hacker who manage dot hack into the computers of some international pop stars (including the ageless diva Madonna). Having broken into their systems, the man would steal their songs and then leak them online, told the authorities. The cops were investigating the case following a report filed by Madonna.

The arrest came after the Israeli police launched an undercover operation to nab the criminal with help from the FBI, told the Israeli police spokeswoman Luba Samri. Madonna has expressed deep gratitude towards both the law enforcing agencies in a statement posted on her Facebook page Wednesday.

“I am profoundly grateful to the FBI, the Israeli Police investigators and anyone else who helped lead to the arrest of this hacker. I deeply appreciate my fans who provided us with pertinent information and continue to do so regarding leaks of my music.”

Talking about the hacking mastermind, Samri says he was born in Tel Aviv in 1976 and was believed to have sold the works of a number of artists online after stealing them from their computers.

“We have confiscated many materials and computer equipment from the suspect’s house and investigations are still under way.”

The stolen material included “songs that haven’t yet been released, sketches of songs, photos and other personal material,” Tamir Afori, Madonna’s attorney in Israel, told Haaretz.

The 38 year old has been charged of intellectual property theft and aggravated fraud, his sinister plans having left Madonna alone by a few million dollars!

In December 2014, unfinished tracks of Madonna’s ‘Rebel Heart’ were leaked online, much befoe the March 2015 scheduled March 2015 release of the album. Following the heist, the pop queen had posted a picture of a broken i-pod on her Instagram account- the broken device symbolizing her broken heart, she had said.

“This broken i-pod is a symbol of my broken heart! That my music has been stolen and leaked! I have been violated as a human and an artist!” she wrote.

“Like any citizen, I have the right to privacy. This invasion into my life – creatively, professionally and personally remains a deeply devastating and hurtful experience, as it must be for all artists who are victims of this type of crime,” Madonna said in a statement.

This case of hacking involving artists and celebrities highlights the scope of cyber crime. Coming closely on the heels of Sony hack, it has left many wondering if they can trust their computers for storing their most confidential and personal data at all!