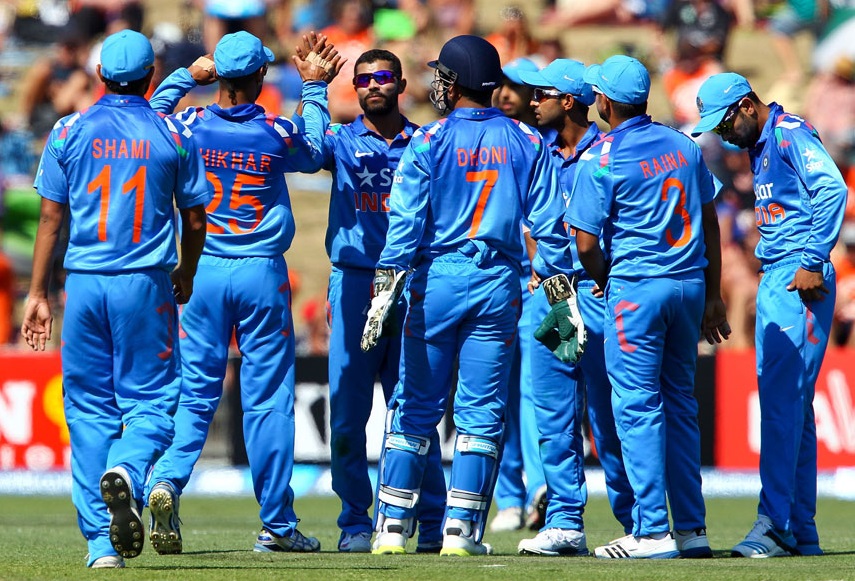 After clinching the last ODI for some saving grace, England will look for some more action in the quicker format as they take on India for the only Twenty20 match scheduled for September 7, 2014 at Edgbaston, Birmingham.

The Ind vs Eng cricket live score can be followed on Cricinfo.com here. 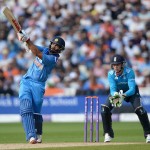 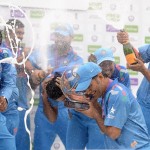 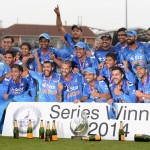 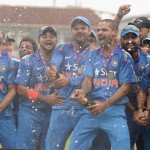 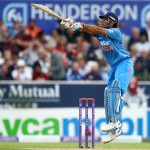 The match will be live on STAR Sports in India and Sky Sports in UK. Fans in Australia can watch the live telecast on Fox Sports and on SuperSport in South Africa.

Watch the live streaming of the match only on Star Sports official site or HERE.

England win the toss and will bat first. Karn Sharma and Jason Roy will debut for India and England respectively.

England goes for the last match of the tournament with a few changes to take on the experienced India T20 side. They have got in Jason Roy to get along Alex Hales on the top, giving Roy the chance to get his international career started with a bang.

Also, England comes with James Taylor, who comes from a clear mind to add up some weight to the team- a certain good move by selectors.

After being dropped from ODIs, Ravi Bopara also returns, and so will Eoin Morgan, who would be looking for some form.

India seems to be more on the confident side as they take on England, given their T20 experience on the home ground. However, from Dhoni to voice captain Virat Kohli, everyone would be looking for some form, especially Kolhi who had dismal performances in all matches and tests.

The highlights videos will be uploaded here after the match is over.

Also, Ajinkya Rahane might have an edge here today as he scored his last century on the same ground for the 4th ODI. 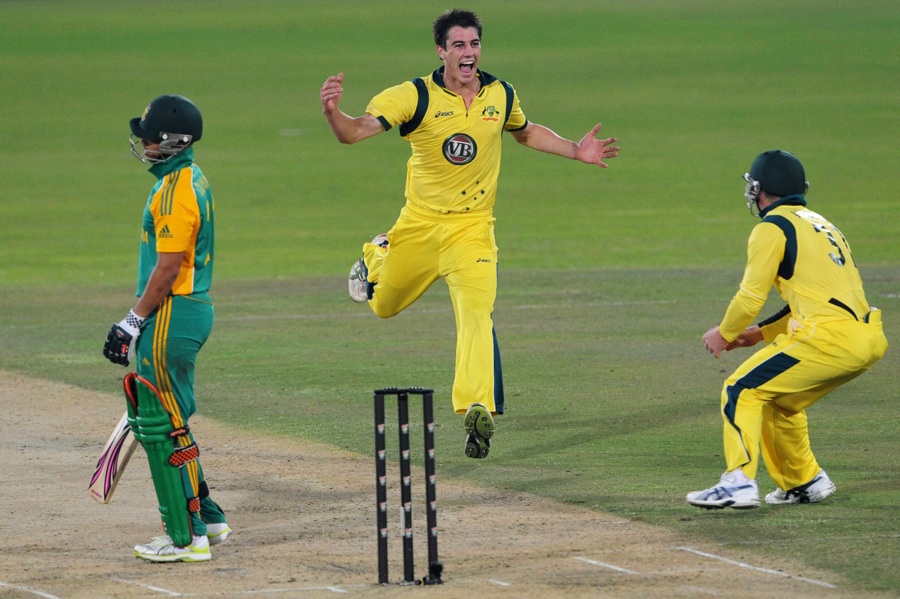 With 2-0 lead in the series after coming from the debacle of test series, India will take on India for the 4th ODI of the five ODI series at Edgbaston, Birmingham on September 2, 2014.

The match will be telecasted exclusively in India by Star Sports, while Sky Sports will be broadcasting the match in UK.

Fox Sports and Orbit Showtime Network will telecast the match in Australia and Middle East respectively.

Star Sports will also be showing the match live online at its official website.

Keeping the test series results away, India managed to revive the lost charm in the ODI format. Both their wins in Cardiff and Nottingham were commendable, with many players coming to the forefront. For the 4th one, they would want to take the home team for a toss.

For England, things aren’t as easy as it seems, especially with the 2015 World Cup in consideration. Apart from the form of their skipper Alastair Cook, there has been serious criticism with regards to players being chosen for the series.

Cook’s captaincy had issues noted by many, although the win in the test series against the visitors did work in his favor. However, with the current condition, many might not want him to lead the team for the World Cup. England needed two off-spinners, but something that Cook wasn’t thinking of.

Given that only two games are left to silence the critics, England has to do some quick thinking, especially because they have lost against teams like Australia and Sri Lanka at home this year.

Coming back to India, Rohit Sharma’s finger injury has shaken the final eleven for sure, and Shikhar Dhawan’s form hasn’t been the best off late.

This gives some scope to Ajinkya Rahane, and also Ambati Rayudu did get a chance to score that fantastic 64 at Trent Bridge.

Murali Vijay has joined in replacement of Rohit, and the selectors will have to make a quick pick on whether Rahane should go back to number four. 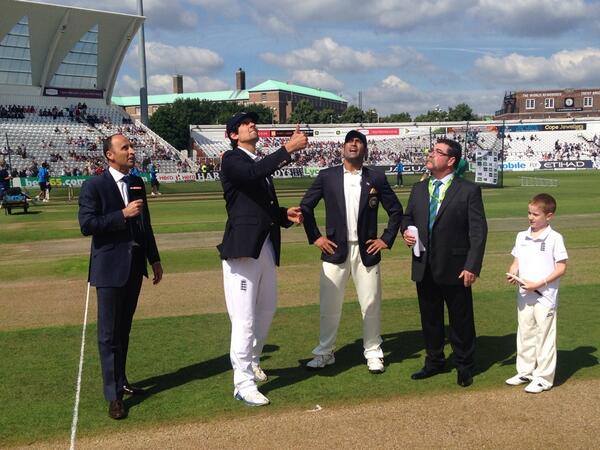 After the 3-1 debacle of India in the four Test series against England, the Indians would like to mend their ways and prove that they were two time World Champions in the Five-ODI series that will begin from Monday, August 25, 2014. 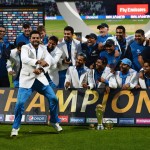 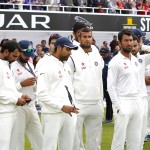 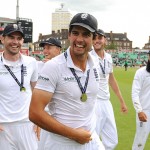 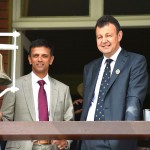 The Ind vs Eng 2nd and 3rd ODIs will be played on August 27th and 30th at Cardiff and Nottingham respectively.

The Indian players are know to play well in the ODIs. India’s wall Rahul Dravid thinks the fresh energy brought in by India’s ODI batting specialists and the vast collective experience of the squad will translate to a better showing in the five-match ODI series.

The start of the match is delayed by rain. Stay tuned for the tos news.

The list of TV channels that will be live telecasting the ODI series in various countries is as below:

Star Sports, the official broadcaster for India and other Asian countries will be live streaming the India vs England series on its official website.

Meanwhile, in a ridiculous piece of news, the Indian selectors including its manager, have restricted the players from bringing/accompanying their wives and girl friends on this tour, particularly the ODI series.

Many have blamed the Indian players for spending a lot of time with their wives and girlfriends who had accompanied them during this tour.

Virat Kohli scored very poorly in all the four Test. His poor form has been blamed for spending time with his girlfriend Bollywood actress Anushka Sharma who was allowed to accompany the cricketer during this tour. Read more on this here.

The probables of the ODI series are as follows: 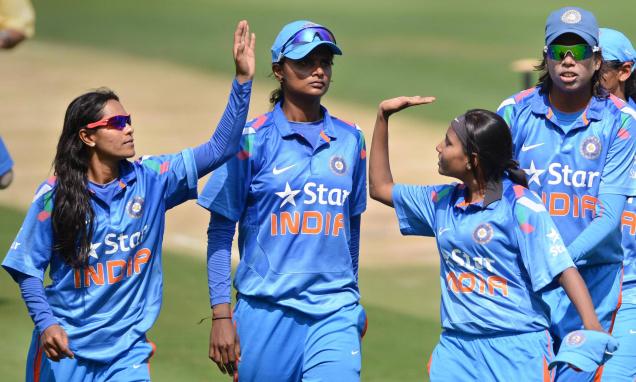 After years, England Women cricket team will be hosting the Indian counterparts in a solo test, scheduled on August 13, 2014 at Wormsley. The match starts off at 11:00 Local Time (3.30 p.m. India time).

This is going to be a tough batter for India as they face the home team after a span of eight years. The entire England Women team has been in great form in both tests and ODIs, proving themselves on more than one occasion.

Indian women have to watch out for the action, given that there are three One-Day Internationals that will soon follow. Things have changed for both sides since their last test.

India Women won the toss and elected to field.

When last reports came in, the England score was 49/5. Follow the live scores on Cricinfo.com here.

The live updates of the Test are also available on Sky Sports official website here.

For India, much of the action depends on skipper and star player Mithali Raj, who remains the hope of the team in many ways.

Jhulan Goswami and Karu Jain have played at Taunton, but apart from the three, none are experienced in the test cricket, something that may cripple the experience factor of the whole team.

The Indian women team plays with no central contracts, and players here are more accustomed to playing in breaks between jobs, where they are given time for training and competition. The semi-professional attitude has it flaws.

While BCCI has done their part is supporting the current tour, there is a need of serious investment here, something that has been missing in women cricket in India.

Undoubtedly, the England counterparts have much better sponsors and training to their side. Predictions at this level should be best avoided, but the Indian side has a serious chance to prove here.