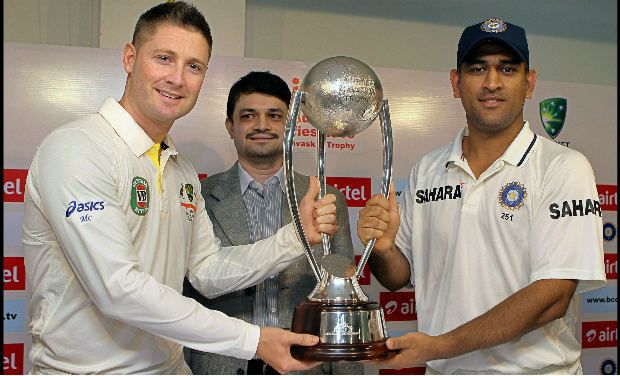 India has managed to put up a decent score on the board after a well-crafted innings by skipper Virat Kohli and Lokesh Rahul. The visitors have taken their score to 342/5 at the end of day three, yet trailing the opponent by 230 runs.

Resuming their innings with 71 on the scoreboard, India lost their first wicket in the form of Rohit Sharma, who was dismissed shortly after reaching his half century (53).

The later part saw a stupendous pairing of Lokesh Rahul and skipper Virat Kohli. Lokesh Rahul clinched the maiden century of his career, but couldn’t add much to that as he fell victim to Mitchell Starc, when on 110.

The Indian skipper on the other side felt even more determined and carried on the Indian innings on his shoulders. Kohli clinched the fourth century of the series to top level Sunil Gavaskar’s record of most centuries in a test match series by an Indian.

However, the innings was met with a follow-on threat when Shane Watson struck with his spell to dismiss Ajinkya Rahane (13) and Suresh Raina (0) in consecutive deliveries.

Wriddhiman Saha (14*), who came in as the replacement for a retired MS Dhoni, stood the crease with Kohli  (140*) till the stumps on the third day.

Catch all the action live on Star Sports TV channel. The live streaming can be watched at the official website of Star Sports here.

India ended the day with a score of 342 with the loss of five wickets, and is still trailing their opposition by 230 runs, inching closer to skip the follow-on mark.

It happened as if like in a script written in some of the previous games in this series; letting the opponents get away with a mammoth score and giving a response through a solid follow-through.

But the visitors would hope the remaining days not to recur. India would definitely be skipping the requirement of pursuing their innings consecutively, but they must certainly keep away from a tumble down in the remaining days and not let the home team end on a winning note