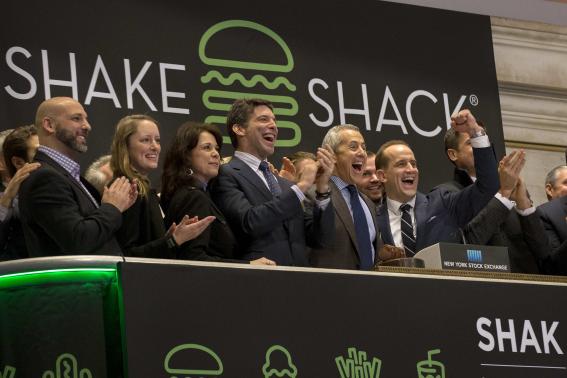 Having started with his Shake Shack business back in 2001 out of a hot dog cart in a New York City park, Danny Meyer now sits atop an hamburger business with 63 locations within and outside the US, and a Friday trading transaction that values the company at about $1.7 billion – and each of its 63 locations worth roughly $27 million each.

Now, Shake Shack spiked over 130% as it debuted Friday after the company priced its shares at $21 each, putting the stock’s performance at its best for the second-best debut within the past 12 months.

According to founder Danny Meyer, “We didn’t have any dreams that today would ever come,” he told CNBC after the stock priced. “We wanted to open a hot dog cart to help a park in Madison Square Park. And when you put a great product together with amazing people with the kind of heart that you have felt here on the floor, these people are doing it, and it’s our staff that this day is for.”

Asked whether the company’s estimated value and performance at the stock exchange put any considerable pressure on the food chain, Meyer answered and said “We cook one burger at a time with one smile at a time, and I don’t know how you value that.”

Marcus Lemonis, investor and host of CNBC’s “The Profit” said the model of placing locations in high-profile, and well-trafficked areas in cities has worked so far for Shake Shack and has no reason to think its performance puts any pressure on the food chain.

According to Meyer, his company’s next challenge is to seek any opportunity in second- and third-tier markets.

“My guess is that Danny Meyer, who is a phenomenal operator, probably already has that model worked out,” he said.

Lemonis believes that the price point of Shake Shack’s products and the simplicity of the menu will work in Milwaukee and Kansas City as well as it does in major markets like New York City and Miami; and that the competition is lower in those smaller cities and the chain could actually achieve higher penetration of burger sales there.

Randy Garutti, CEO of Shake Shack, stated that even though sales have slumped at comparable stores, the future growth of the company will come from restaurant expansion. “There’s a seismic shift in how people are eating today. People are trading up from [quick serve restaurants],” he said. “I know my kids and my kids’ generation; they’re not eating fast food. They want more. They expect more.”

The company is trading under the ticker symbol “SHAK” on the New York Stock Exchange; and it opened at $47 per share. In the year ended Dec. 25, 2013, Shake Shack’s revenue totaled $82.5 million, a $25 million revenue gain from the 2012 fiscal year, according to an SEC filing.