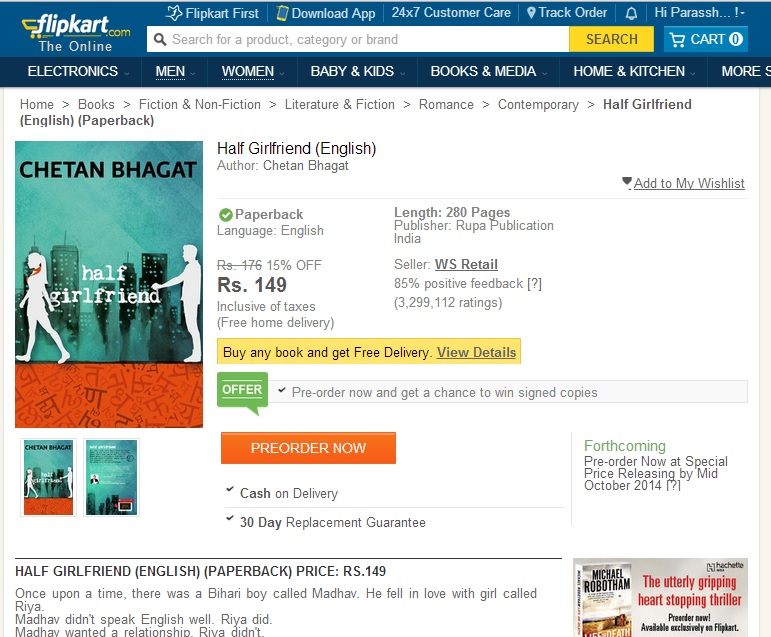 Indian novelist Chetan Bhagat announces the release of his new book, ‘Half Girlfriend’ this October.

After his best sellers- ‘3 mistakes of my life’, ‘5 point someone’ and ‘Revolution 2020’; Chetan Bhagat brought uproar again with numbers as a title of the book is ‘Half Girlfriend’.

There are many assumptions related to the title of the book, as to what really Bhagat means by Half Girlfriend.  According to the sources ‘Half Girlfriend’ is a story of a boy named Madhav, who is Bihari and falls in love with the rich beautiful Delhi girl Riya.

India’s biggest storyteller is back with his unique love story this time. The followers of Chetan’s novels are extremely excited about it.

Buy ‘Half Girlfriend’ on Flipkart here.

The  first chapter of the book  was available on the website for free. However after the announcement of title of the book, Bhagat told media that his website got crashed due to heavy traffic.

There is an interesting teaser of the book is available on YouTube which goes like: ‘Madhav didn’t speak English well. Riya did. Madhav wanted a relationship.

The banker turned writer, Chetan Bhagat’s novels had been adapted on the Silver screens. Chetan’s new love story is published by Rupa and can be pre-order at Rs. 149 only.

Half Girlfriend which talks about youth relationship, it is even available on Flipkart. Though the book releasing date is due in October but online bookstore Flipkart allows you to pre-order it.