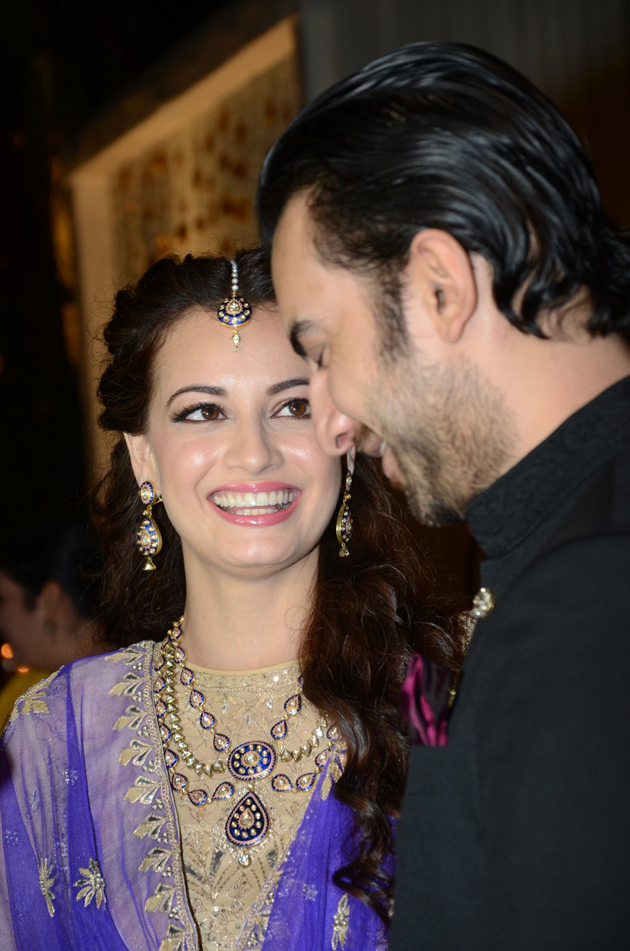 and the duo was seen celebrating their best at the ‘Mehendi’ Ceremony on October 17, 2014.

Dia, who has been long dating Sangha, chose a nice private location at Chhatarpur Farms, New Delhi for the special days and the grand event.

The “Love Breakups Zindagi” actress was seen wearing a stunning blue lehenga by designer Anita Dongre. She completed the look with wavy hair set to the T with matching Kundan jewelry.

According to a report on NDTV, the actress had a special song that was choreographed exclusively for the sangeet function.

Dia and Sahil chose quite a private setup for the wedding, although they came up to the media and interacted with them.

The couple will get married on October 18, in a private wedding.

Dia has confirmed to the media that actor Boman Irani will be doing her “Kanyadaan”, as she had wanted since the time she and Boman worked in the movie “Lage Raho MunnaBhai”.

Boman will now be doing all the good rituals that the father is supposed to do at the wedding.

Reports have it that Dia will be holding a big reception for friends and colleagues in Mumbai.

Dia got engaged to Sahil after the latter proposed her in New York in April.

We cannot wait to see Dia in her wedding outfit!