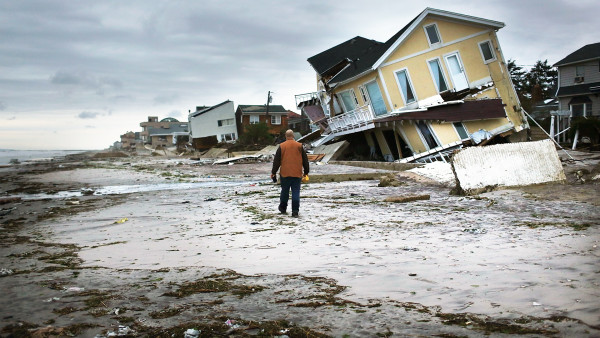 A new study has found evidence that extreme hurricanes are likely to pound New York City in the coming decades because of climate change.

New York could be battered by more hurricanes like Sandy because of climate change and rising sea levels according to a new study. A coordinated study among researchers with the University of Princeton, University of Rutgers, and the Woods Hole Oceanographic Institution found that surge floods are likely to multiply by 17 times between 2000 and 2100 in the worst case scenario.

Scientists gathered historical data including tidal-gauge and geological records from New York since 1856 to assist with the study. The data was then used to develop computer simulations that projected the frequency of floods in the decades ahead, which included models of storm intensity, storm surges, and possible sea levels.

Results indicated the frequency of severe hurricanes increased nearly threefold between 1800 and 2000. In New York, particularly, the magnitude of Sandy-like storms has risen to once every 400 years in 2000 compared to once every 1,200 in 1800.

According to these estimates, by the year 2100, floods are anticipated to happen once every 90 years. The gradual rise is sea level is attributed to the progressive sinking of the mid-Atlantic region towards the end of the last ice age. Over the course of the late 20th century, however, human-influenced climate change accelerated the trend.

Ning Lin, lead author of the study and an Assistant Professor of Civil and Environmental Engineering at Princeton University, said the incidence of extreme storms has increased drastically over the last two decades. Alterations in storm climatology and elevated sea levels, Lin added, are expected to influence the rate of storms over the 21st century.

“The grand answer is that things are going to get worse by 2100. If nothing changes with hurricanes, sea-level rise alone will increase the frequency of Sandy-like events by 2100,” said Researcher Benjamin Horton with Rutgers University.