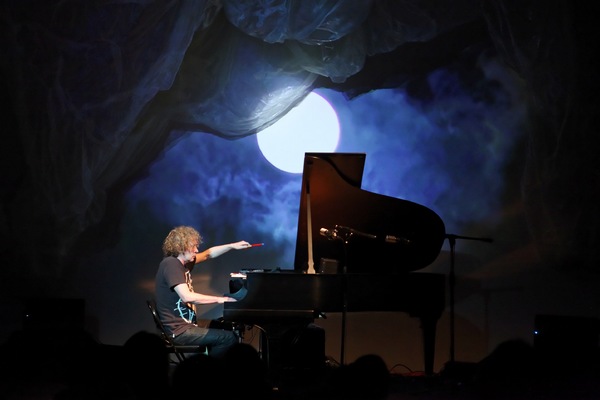 Peter Manning Robinson is a composer, pianist, and vegan chef who has won an Emmy and multiple BMI awards. In recent years, performing on his newly created The Refractor Piano™, Robinson is pioneering a new style of music called “refracted music.” Without prerecorded tracks, triggered samples, external sounds, or MIDI instruments, he creates innovative music that combines classical and jazz composition with improvisation and acoustic refraction for transcendent live musical experiences.

He was born in Chicago and grew up in Vancouver, Canada as well as on the streets of San Francisco. At age 16, he ventured to Los Angeles. Robinson started touring and playing in clubs at a young age and received formal music training from USC and Berklee College of Music in Boston.

He has performed and recorded with such jazz greats as Ernie Watts, Phil Woods, and Freddie Hubbard. Robinson has also composed for film and television. He first met creative collaborator Klaus Hoch when he composed the music for Flypaper, which Hoch wrote and directed. Additional credits include Without A Trace and The Crow. Robinson won an Emmy Award for KABC’s Above and Below and five BMI TV Music Awards for Without a Trace. He was also nominated for an OFTA Television Award for The Unexpected Mrs. Pollifax. Members of The London Philharmonic, MusicaNova Orchestra, and the Los Angeles Chamber Orchestra have recorded his orchestral works.

Wearing many hats as creative director and producer, Klaus Hoch is a filmmaker who has collaborated with Peter Manning Robinson for the past six years on The Refractor Piano™ project. He and Robinson first collaborated on the feature Flypaper, which Hoch wrote and directed – a black comedy crime film featuring Craig Sheffer, Robert Loggia, Illeana Douglas, and Lucy Liu. Hoch studied music composition with pianist and composer Wally Cirillo as well as guitar with jazz legend Joe Diorio. He earned an MFA from NYU in Film and Television and is a member of the Directors Guild of America.

In Robinson’s hands, The Refractor Piano™, an adapted Steinway, is capable of generating a remarkable array of never-heard-before sounds. While the music is composed and the performance process is well-planned, “refracting” the raw acoustic sound makes each performance unique and never an exact reproduction.

In a sense, Robinson plays inside the refractions generated by his newly created instrument. His innovative compositions, rooted in classical and jazz traditions combined with improvisation and acoustic refraction, produce a truly original and transcendent live music experience.

As Robinson performs, he rides the refractions as he bends and morphs the raw sound. The new textures he creates – acoustic refractions – are used to generate the distinct instruments and voices of each composition. Using the keyboard, fingers, mallets, and other implements, Robinson uses the entire piano to conjure up his new music.

What people are saying:

“… something new in some quite delightful ways … The refractions create a spectrum of sound as colorful and vivid as a rainbow, with Peter responding to the refractions with a virtuosic touch…” – Steven Hochman, covers music for KPCC, KQED, L​os Angeles Times

“With Lisztian abandon, Robinson is obviously at home in free-form atonal music while maintaining both his classical and his jazz roots.” – Titus Levi, Keyboard Magazine