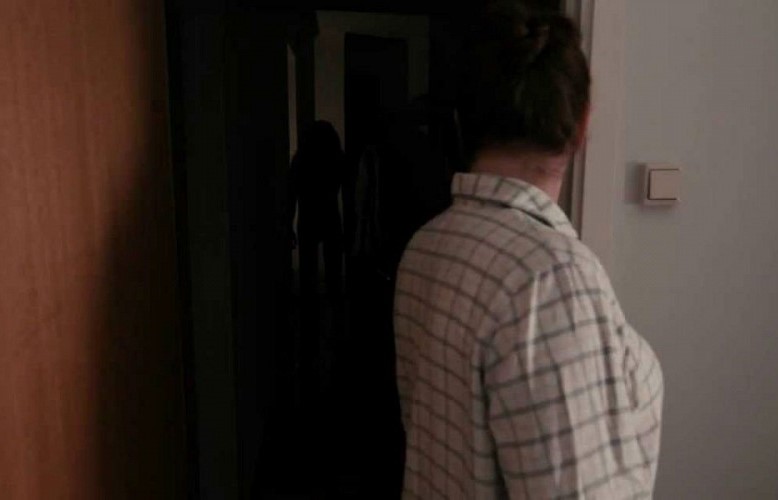 Lotta Losten, who is in the feature, is shown in a scene from the original short film.

When the lights are out, what could be hiding in the shadows? This question is answered in Lights Out, the feature film debut for director David F. Sandberg. The film has an interesting history. The two minute short was made by Sandberg and his wife, Lotta Losten and was submitted to a U.K. short film challenge. Though the film didn’t win any awards, Sandberg won the Best Director award. Its YouTube video, however, went viral. Soon enough, Hollywood came calling. The film went viral in late 2014 and in early 2015, Sandberg and Losten were flown to Los Angeles to meet with studio executives. In late 2015, Lights Out was in production and is now being released. For those who may not know, this is an incredibly short time for a film to be made.

The film centers around Rebecca (Teresa Palmer) who moved away from home when her mother Sophie (Maria Bello) began acting strangely after the death of her father. Rebecca’s younger stepbrother (Gabriel Bateman) is now exhibiting similar behavior. Much of Sophie’s problems lie in her insistence that her deceased childhood friend, Diana, whose skin condition kept her living in the dark, is still in their lives. Like many horror directors, David is a horror fan, though his tastes have evolved.

David: Lots of horror movies and stuff. My tastes sort of changed. As I kid, I would watch Nightmare on Elm Street and a lot of Italian horror movies from the 70s and 80s. At that time, I liked gory horror movies. Now I’m more interested in suspense and mood and creating something that’s not about blood.

Many aspiring filmmakers are faced with the dilemma of how to create a movie with no budget and no resources. David and Lotta had to get creative.

David: What scary thing can we do in an apartment with one actor. We’ve all experienced when you turn off the light and a shadow looks like a person and you turn the light back on. What if there actually was someone there every time you turn the lights off.

Hollywood is famous for making its rags-to-riches, overnight success stories. Well, David and Lotta are literally living that exact same experience. It wouldn’t surprise me if a film is made of their astounding journey.

David: It’s such a surreal experience. We made this short film for no money back home in Sweden…
Lotta: Just the two of us.

Lotta: We didn’t know what it meant.

David: Then all these people from Hollywood wanted to talk to us. We were getting contacted by agents and managers and producers and studios. I had to make a spreadsheet of everyone I talked to to keep track of it all. I had to get an imdbPro account just to see who they were. One of the first producers who got in touch with us was Lawrence Grey. I really connected with him and he knew what he was doing. He was really interested in making this into a feature. He had talked to James Wan (Saw, The Conjuring) about making something together and he thought that this could be it. James had seen the short online and really liked it, but he didn’t know if there was enough there for a movie. I wrote a treatment about what I wanted the story and the characters to be that Lawrence gave to James and James really liked it. Lawrence flew us out here for a couple weeks to meet with James and James got New Line involved because they have a relationship. It just came together great and really smoothly. People keep saying that, ‘don’t get used to it. That’s not how it works.

Lotta: From November in 2014 to March when we flew over here in 2015, we kept waiting and waiting. I had a job and I kept telling them, ‘I might be going to Hollywood for a while but I don’t know when, so I will need time off.’ But [my job] has been a part of this entire story. They had heard about everything that had happened and they wanted to help me as best they could. When Hollywood called and said it’s happening, I had to quit my job because they couldn’t give me any time off. They said, ‘if you come back in a few months, you will get a new job.’ We kind of realized quickly that we wouldn’t be going back in a few months.

David: It happened so fast. We just locked our door and got on a plane. For the first week, the studio paid for our hotel. Then we had to find places on Airbnb.

Lotta: We couldn’t get a big lease because we don’t have a credit score here and we didn’t know how long we’d be here so it was month to month. In January, we got a real apartment.

David: We sort of went along on this adventure to see what would happen. When we first got here, we were invited to a party. Furious 7 had just made a billion dollars and they had a party for [director] James [Wan] to celebrate that. We were invited to that when we just got here. We didn’t have any money. We had to borrow everything we could from our parents to be able just to afford to stay here. We were invited to this mansion in Beverly Hills and these celebrities were there. We felt like such imposters. We’re these broke Swedes who had just gotten into this Hollywood party. We were just standing in a corner speaking Swedish to each other and trying to look like we knew what we were doing.

Lotta: The dress I was wearing was bought at Goodwill. The zipper on the dress broke as I was trying it on that morning. Our neighbor was actually a seamstress and she fixed my dress. She had to sew it on me so I couldn’t move it without breaking it. She was also a hair dresser so she fixed my hair. It was so crazy. We were going to this big fancy party and we had no money. It was so new to us.

Since everything else was already happening so fast, David was plugged to direct the feature.

David: It was my first time on a film set. There was so much I didn’t know. We were flown halfway across the world. Here’s this film team and we’re going to make a movie. I had to ask the first assistant director, ‘when do I actually say ‘action?’’ I didn’t know. This was film school to me to learn how it worked.

Lotta: This all an adventure for us. This is our first press junket. Everything that has happened since we flew over a year and a half ago has been new. We just follow along and see what happens. Maybe in the future, it will really sink in.

David: It’s the best time ever to be a filmmaker. You have all these tools available. You can record audio on a recorder and shoot video on an iPhone. There’s no one stopping you from creating these things and you can put them up online where everyone can see them. You also have these communities of everyone sharing their knowledge. You have film school and film exhibition online. You never know what that one thing is that will resonate with people. We had no idea that our little two and a half minute short would lead to all this. That was one short of many we were going to make.

Lotta: Some people think you need someone bigger than you to make something like this. We realized you just need your friends and your family and can make things with what you have. We made lights with IKEA stuff, like a trash can. Out tiny budget caused a lot of limitations that actually created the inspiration for it. We didn’t have fancy lighting so we had to have a lot of darkness. You keep getting better and better and keep putting stuff out here and hope you get noticed. You might not go to Hollywood, but maybe you’ll be famous on YouTube.

David: I’ve heard of other people on YouTube getting attention from Hollywood. The only thing you can do is follow your passion.

Lights Out is now in theaters.