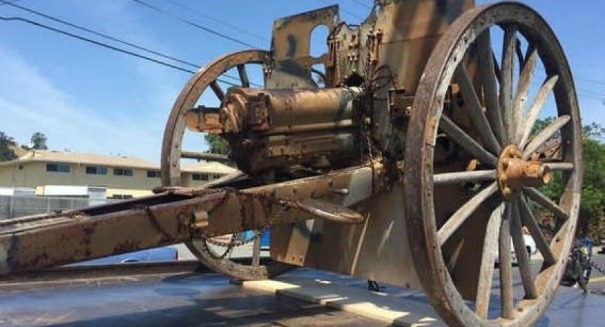 Thieves made off with 1-ton WWI-era cannon in a daring theft in California.

Thieves made off with a huge World War I-era cannon that had been on display in Richmond, Calif. for 70 years.

The cannon has since been returned to its home at Veterans Memorial Hall in the city, about two weeks after thieves made off with it May 1, according to various reports.

Surveillance footage showed two men using bolt cutters to cut the cannon loose before loading the giant 5-foot-tall brass and iron cannon onto a pickup truck and then driving off.

An unidentified man then called police, saying he had bought the cannon for $1,200 not realizing it had been stolen. News reports on the theft tipped him off, prompting him to reach out to authorities right away. The cannon had been sitting in his front yard at the time.

No suspects have been identified, and police are still investigating.

The cannon was first put on display in front of the veteran’s hall in 1947.

The Richmond Police Department posted a thank-you note on its Facebook page on May 12:

THANK YOU FOR YOUR ASSISTANCE
Yesterday, we asked for your help in locating a WW I era cannon that was stolen from the Richmond Veterans Memorial Hall on 23rd St. NBC Bay Area’s Jodi Hernandez helped us and pushed the story out on mainstream media. We told the story via our department Facebook, Nextdoor, Instagram and Twitter.
Today (5/12/16), we received several tips regarding the stolen cannon. We also received a phone call from a gentleman who saw the story air on NBC; he realized the cannon he bought a few days ago for $1,200 was the cannon that was stolen from the Veterans Hall. This gentleman was more than helpful and felt absolutely horrible he had inadvertently bought a stolen piece of American history.
RPD Property Crimes Detective T. Kaiser, Detective Sergeant E. Russell and Detective P. Martin went out to the City of Martinez and recovered the cannon. The cannon was brought back to the same location it had stood guard for almost 70 years and returned to the rightful owners – the brave men and women who fought for our country and our freedom – our military veterans.
The detectives are working hard on leads to solve this case.
We want to thank NBC Bay Area, our community residents, residents in the Bay Area and the gentleman who did the right thing and called us. You are all amazing people and we appreciate all your help. This is a great example of community policing – community, media and police working in harmony