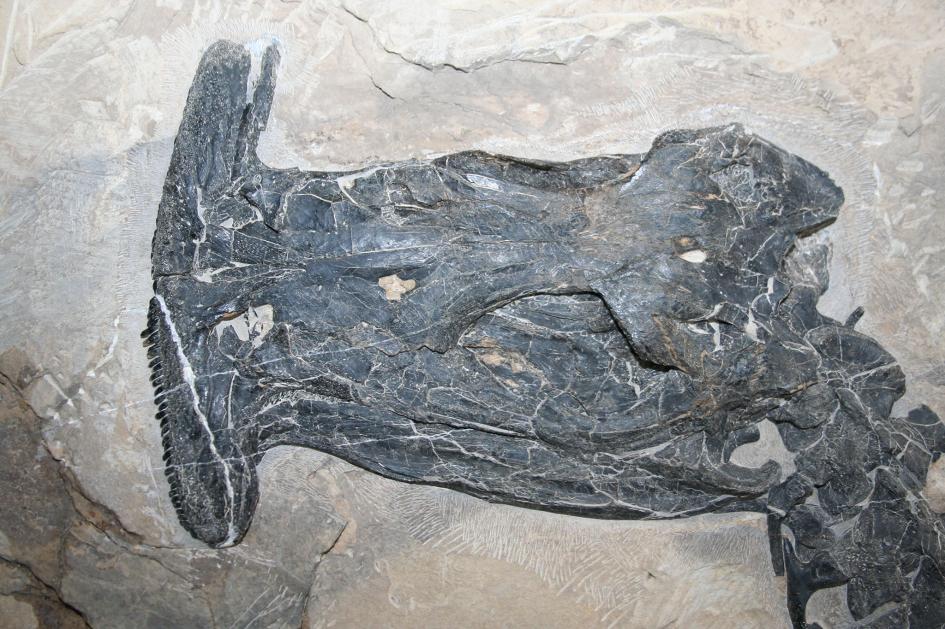 Photograph by W. Gao, Institute of Vertebrate Paleontology and Paleoanthropology

Back in 2014, scientists found a new fossil that they thought resembled a hammerhead shark, and they thought it likely foraged across the ocean floor, dining on small crustaceans and other small prey.  But a new fossil recently found is causing the researchers to do a double-take, according to National Geographic.

A 243-million-year-old fossil of a species named Atopodentatus unicus, which is Latin for “unique peculiar teeth,” has been discovered in the Yunnan Province of southwestern China, and the new research says not only was the species not a fish, but it probably fed on algae.  This would make this species the first marine reptile that was a vegetarian.

Nick Fraser, a paleontologist at the National Museum of Scotland, said they “were blown away by this.”

The researchers on the original fossil thought it looked like many other marine reptiles of the period, but they were fascinated by its mouth, in particular the hundreds of tightly packed teeth it contained.  The first fossil skull was slightly disfigured, sort of like the down-turned snout of a flamingo, leading the team to think the creature must have used it to dig out small prey from the ocean floor.

Fraser said, “The animal described in 2014 was based on one specimen, which was pretty complete to be honest.  But the skull was a bit mashed up, particularly on the front end, and it was difficult to see how it all went together. The original authors obviously did the best they could.”

The new skull led the scientists to surmise this reptile was using its large front teeth to loosen algae from the ocean floor and then filter it through the dense rows of teeth, trapping the vegetation while releasing the water.

Paleontologist Sterling Nesbitt, of Virginia Polytechnic University, likened the reptile to an “underwater lawn mower,” adding, “There is absolutely nothing like it alive today.”

The animal lived about six million years after the Permian extinction, one of the largest mass die-offs in the history of the world, killing almost 95 percent of all marine life.  The scientists say the explosion of life after that period may help explain why we are seeing features in fossil remains designed to take advantage of new types of food sources.

Fraser continues, “We are finding new species all the time, and once we have got a few more under our belt, we might be able to start putting together a little bit more about the ecosystem and how the whole thing interacts.  There is huge potential for so much more to be done, and this is possibly just the tip of the iceberg.”