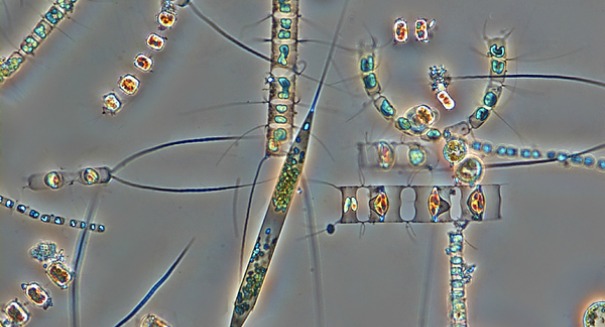 Phytoplankton are forming on the surface of the ocean -- but why? Scientists think it might have something to do with nutrients from the bottom of the ocean.

Researchers out of Columbia University’s Earth Institute have found a new and unexpected biological phenomenon in the Gulf of Mexico: that communities of phytoplankton are thriving above natural oil seeps.

According to UPI, scientists have found tiny algae-like microorganisms known as phytoplankton gathering where natural oil seeps from the ocean floor to its surface.

This oil and gas comes from crevices where it gets stuck at the bottom of the ocean. Reservoirs of oil and gas will cumulate trapped under rocks and sediment  on the ocean floor. This gas eventually finds its way to the surface via natural oil seeps.

So why is it significant that phytoplankton have been discovered at these natural oil seeps?

The oil and gas that travels to the surface has been deemed non-beneficial by scientists — however, the nutrients that these gas bubbles bring with them to the surface are definitely important. The reason phytoplankton can survive at the top of these seeps has to do with the bottom-dwelling nutrients that gert carried to the surface via bubbles of gas and oil.

“This is the beginning of evidence that some microbes in the Gulf may be preconditioned to survive with oil, at least at lower concentrations,” said Ajit Subramaniam, an oceanographer at Columbia University’s Lamont-Doherty Earth University in a press release.

What is of interest to Subramaniam and other scientists is how the phytoplankton are “not negatively affected at low concentrations of oil, and there is an accompanying process that helps them thrive.”

This is a result of the nutrients which bubble up to the surface. In lab experiments, it was found that phytoplankton cannot be supported by oil itself. The nutrients are playing a hugely important role in its development.