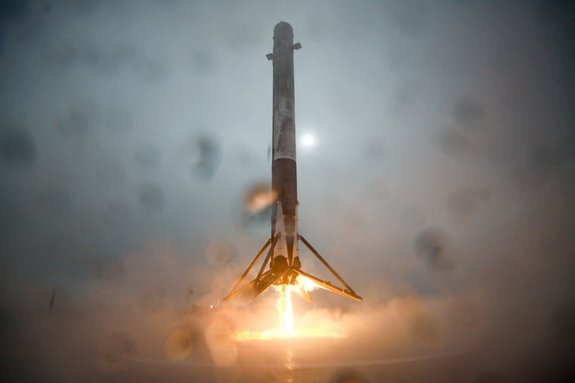 The company is still working on re-landing its SpaceX rockets in hopes of reusing them for future launches, thereby saving money on unmanned space missions.

Falcon 9, the most recent SpaceX rocket to attempt a landing after delivering a satellite into orbit, tipped over on impact and exploded. It was a near miss. The rocket reached the 300-by-170 foot landing pad on an ocean barge successfully, but tipped when one of its four legs failed to latch. The rocket then exploded.

SpaceX CEO Elon Musk posted a video of the landing attempt on Instagram. His post stated that the cause of the failure may have been “ice buildup due to condensation from heavy fog at liftoff.”

The rocket was able to successfully deliver a satellite into orbit on Sunday. It was intended to land on an unmanned sea-based barge. The company is still working on re-landing its SpaceX rockets in hopes of reusing them for future launches, thereby saving money on unmanned space missions. Only one out of four attempts in the past year have been successful. Although the landings have largely gone wrong, SpaceX has shown itself to be reliable in getting its payloads into space.

The Jason-3 satellite delivered by Falcon 9 will “monitor 95 percent of the world’s ice-free oceans every 10 days,” according to a news release from the National Oceanic and Atmospheric Administration (NOAA). It will undergo a six-month test phase of its instruments before officially beginning operations. Jason-3 will join Jason-2, which was launched in 2008.

In a Tweet on Sunday, Musk acknowledged the difficulty of landing a rocket on an ocean barge. “Definitely harder to land on a ship. Similar to an aircraft carrier vs land: much smaller target area, that’s also translating & rotating.”

Musk plans to continue to attempt ship landings, which he cites as important for higher-velocity launches. He was encouraged by the most recent rocket landing attempt, saying that “at least the pieces were bigger this time!”

Jason-3 is an international mission. NOAA is partnering with NASA, the French Space Agency CNES, and the European Organisation for the Exploitation of Meteorological Satellites (EUMETSAT).