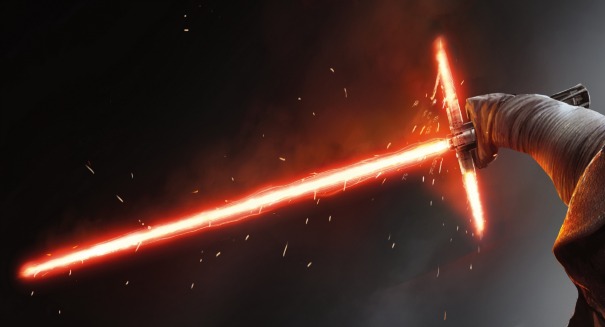 Star Wars weapons are becoming more realistic every day, but will we ever have a true lightsaber in our arsenal?

The latest Star Wars movie, Episode VII: The Force Awakens, was released this week, much to the excitement of fans around the world. The Star Wars craze is back in full swing, and even the military has developed an interest in some of the laser systems shown in the new film.

According to a report from Fox Tech News, American defense companies are hard at work building new weapons systems for airplanes, drones, land vehicles, and even boats for the U.S. military in an attempt to fully utilize the power of lasers.

While they may not be as grandiose as some of the cannons shown in Star Wars, Boeing is hard at work developing a laser system that could be used to defend against incoming drone attacks in the near future. The Compact Laser Weapon System is a smaller, more mobile version of the company’s High Energy Laser Mobile Detonator. The laser emits a focused beam of energy that can burn a hole in a drone, forcing it to drop out of the sky.

Not to be outdone, fellow defense contractor Lockheed Martin is now working on a laser turret that would be mounted on top of fighter jets flying near the speed of sound. The laser turret would have a 360-degree range, allowing pilots to take out any threat that would appear in the sky. So far, the laser turret has been tested on about 60 flights. Lockheed has been working with DARPA and the U.S. Air Force to develop the laser system.

Other laser projects on the horizon include a truck-mounted laser built by Northrup Grumman that can deliver 10 kilowatts of solid-state energy, and a naval laser weapons system called the Area Defense Anti-Munitions, or ADAM system. But what about the one Star Wars weapon that is the most likely to come to mind?

A team of researchers from the University of Queensland ARC Centre of Excellence for Engineered Quantum Systems has explained the science behind the infamous light saber, suggesting that we are still quite a few technological breakthroughs away from realizing a true light saber.

A light saber is supposedly made from plasma, a gas that has had its electrons stripped away. It would be extremely difficult to confine this plasma in the shape of a sword without using an external guard, which would create a barrier between the plasma itself and an obstacle. A real-life light saber would also need an extremely dense power source, something battery technology has yet to achieve.

Despite the technological challenges associated with building a real light saber, weapons technology is progressing towards the full adoption of lasers at a rapid pace. It might not be long before lasers become the defense industry standard.

A press release from Lockheed Martin describing the new laser turret system can be found here.