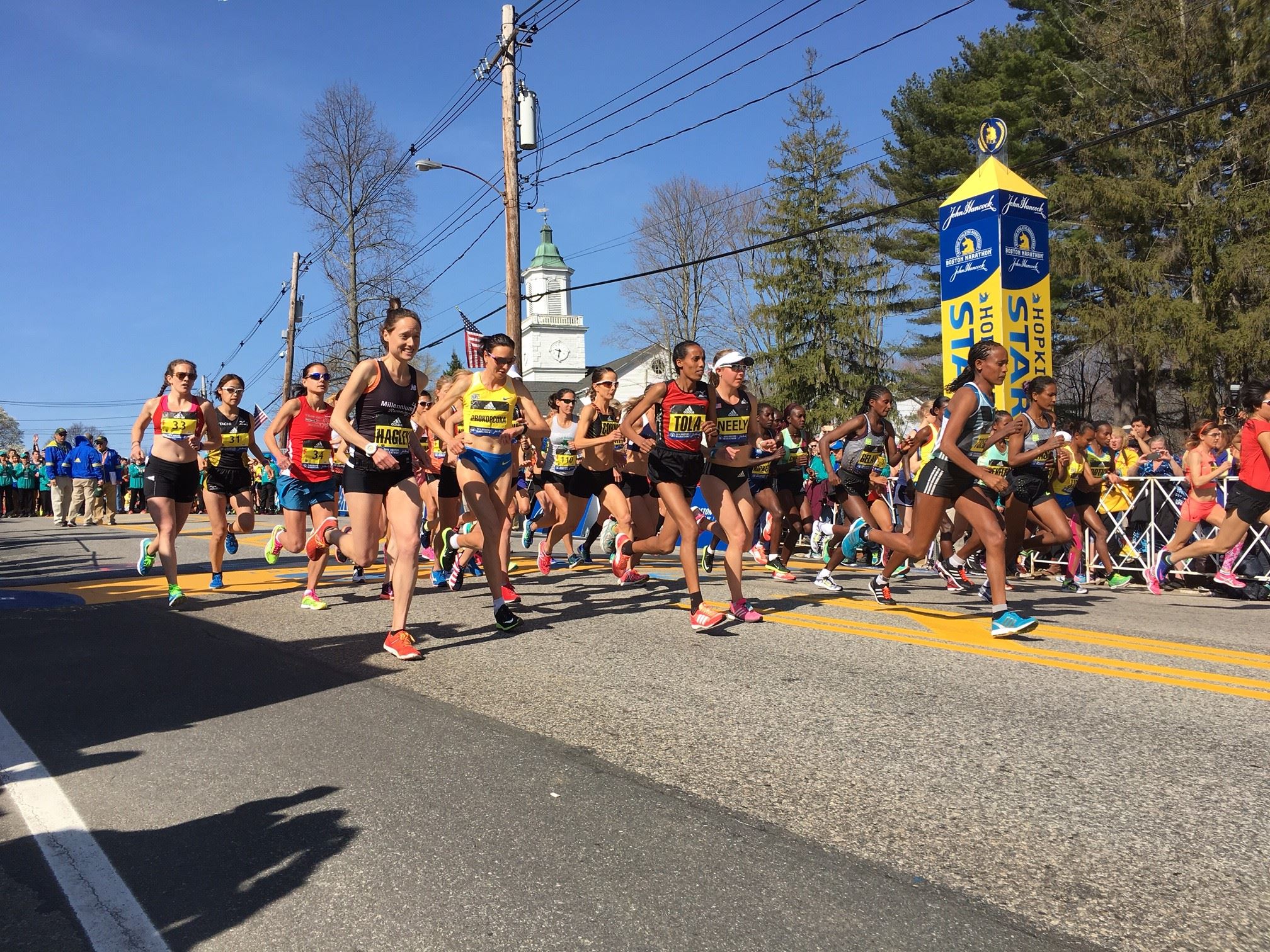 The day was warm and sunny for the 120th running of the famous race, which boasted 30,000 participants.

On a sunny warm day in Boston with almost no wind, Atsede Baysa of Ethiopia captured the women’s division of the 120th running of the historic Boston Marathon in the time of 2:28:18. The men’s race was won by Lemi Berhanu Hayle, also of Ethiopia in 2:12:43. This is the first time both the men’s and women’s races have been swept by Ethiopia.

Switzerland’s Marcel Hug won the men’s push-rim competition by less than a second in the most exciting finish ever seen in the wheelchair race. Tatyana McFadden of the U.S. took the women’s push-rim by nearly 2 minutes.

Three years after bombing destroyed the day, today’s race has 30,000 runners participating. This is also the 50-year anniversary of Bobbi Gibb’s historic unofficial run as the first woman to complete the race.

Boston is the only marathon in the world that requires qualifying times, which are age-based. Today’s race marks the first time the racers will follow a blue line down the course, a tradition among many world class marathons that has never been done in Boston.

Ten women with sub-2:24 times are included in the field, including 2015 champion Caroline Rotich (Kenya), 2:23:22 PR, and 2012 Olympic gold medalist Tiki Gelana (Ethiopia). Buzunesh Deba of Ethiopia has one of the fastest times in the field with a 2:19:59 PR. The top Americans in the women’s race include Neely Spence Gracey of Superior, Col., in her debut marathon, and Sarah Crouch of Blowing Rock, N.C., PR 2:32.

Ten men with PRs under 2:06 were running in today’s in elite men’s field. Two-time champ Ethiopian Lelisa Desisa ws going for his for third title against Kenyan Wesley Korir, who won in 2012, along with Yemane Tsegay (Ethiopia) and Wilson Chebet (Kenya) who were second and third in Boston last year. The top Americans in the men’s race were Ian Burrell, Colorado Springs, Col., PR 2:13:26 and Jordan Chipangama, Flagstaff, Ariz., PR 2:11:35.

The wheelchair race (push-rim) included nine past Boston Marathon champions, including Marcel Hug (Switzerland) and Tatyana McFadden (U.S.), who was going for four in a row. Ernst van Dyk of South Africa was looking for his 11th title. Course record holder Joshua Cassidy was also present. Hul had the fastest qualifying time with 1:21:40.

In the first surprise of the day, last year’s champion Rotich dropped out only 8K (5 mi) into the race. One of best runners in the world was out of the race only 30 minutes in.

The pace picked up up by 25K, which the leaders reached in 1:29:10. At this point the lead pack was down to a crowd of four, three Kenyans and an Ethiopian, and the women were speeding up, clocking a 5K split of 17:29. The mile pace had dropped from 5:58 per mile to 5:37 to 5:02, at which point the lead pack had broken up, leaving only Tirfi Tsegaye, Joyce Chepkirui, Valentine Kipketer, and Flomena Cheyech Daniel in front.

Daniel dropped off after a 5:45 mile split at the start of the Newton hills, and the lead pack was looking like the podium finishers, as Tsegaye, Chepkirui and Kipketer ran side by side. However, Atsede Baysa of Ethiopia had other ideas, passing everyone and moving into the lead at 40K after a strong surge that brought her from far behind the lead pack. She was 37 seconds behind at the 21.7 mile mark.

Baysa, with a 2:22:03 PR, was not expected to be a factor in today’s race. She was working for a spot on the Ethiopian Olympic team. She was looking uncatchable with only a mile to go though, averaging 3:20 per kilometer for the last 5K and an 11-second lead.

Shingo Igarashi of Japan (PR 2:13:14) jumped to an early lead, leaving the lead pack behind, but was absorbed again before much distance went by. The pace was 31:18 at 10K and 20K in 63:12 with Robi Deribe of Ethiopia in front.

The men passed the half marathon mark in 1:06:48, with a lead pack of 10 bunched close together. At the half-marathon the men had a predicted finishing time at this point of 2:13.

The defending champion Desisa moved to the front at a long downhill after Welsley College, leading at 30K after hanging in the back of the leaders for much of the race. He and Ethiopian Lemi Berhanu Hayle led the lead pack by a 14 seconds through the Newton hills, moving at a scorching pace. Desisa has a 27-minute 10K time, so had plenty of speed to use for the finish.

Hayle and Desisa continued to run side-by-side at a 3:03 per kilometer pace and a 17-second lead with about 10 minutes left to run, but Hayle pulled ahead of the two-time Boston champ Desisa with the Citgo sign in sight and about 2 miles to go. He continued to stretch the lead over the defending champion, turning onto Boylston street with a huge lead, taking the top spot in a time of 2:12:43. Desisa, limping slightly, was second. Tsegay was third.

One of the most thrilling men’s finishes ever occurred today with Van Dyk, Kurt Fearnley of Austria and Hug coming down Boylston street together in a side-by-side sprint for the finish. Hug took the victory in 1:24:05. Van Dyke nipped Fearnley for second in a photo finish less than a second behind.

McFadden led the women’s race from mile 9 and went on to win by a large margin in a time of 1:42:15 for her fourth consecutive win. Jersey for team MR8, for Martin Richards, a bombing victim killed at the finish line 3 years ago.